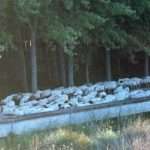 Four verbs used by Jesus in the Gospel reading help us to think about the sheep and the shepherd. “Belong” from Saint John Chapter 10 Verse 26; “hear” and “follow” from Verse 27; and “never perish” from Verse 28. Belong, hear, follow, never perish: four steps in our faith.

Jesus is in the Temple in Jerusalem and he is surrounded his opponents. They are in a confrontational mood, Verse 24 says, “So the Jews gathered around him and said to him, ‘How long will you keep us in suspense? If you are the Messiah, tell us plainly.'” They do not believe he is the Messiah, they are not going to believe he is the Messiah, what they want are words of Jesus that they might try to use against him. Jesus answers them in blunt terms in Verses 25-26 “I have told you, and you do not believe. The works that I do in my Father’s name testify to me; but you do not believe, because you do not belong to my sheep.” Jesus’ words, that they do not believe because they do not belong, say to us that it is the shepherd who calls his sheep, that it is God who calls his people. In Saint John Chapter 6 Verse 44, Jesus tells the crowd, “No one can come to me unless drawn by the Father who sent me.” Saint John develops the idea in his own letters, in the First Letter of John Chapter 4 Verse 19, he writes, “We love because he first loved us.” The sheep belong because the shepherd has chosen them, we belong because God has chosen us.

What does it say to us about our own faith, that we belong to God because he has called us ? Doesn’t it make it something challenging, disturbing even, the thought that we have been chosen? Doesn’t it make us take much more seriously what it means to belong? We belong not because we have joined, but because we have been called to be one of his people; what difference to our thinking might that make?

Belong, the second verb is “hear,” Jesus says in Verse 27, “My sheep hear my voice.” If the sheep have been called by the shepherd, then they know the voice of the shepherd, the shepherd is familiar to them. Jesus’ followers must have spent man, many hours listening to his teaching, listening to his voice. Like sheep can tell between the voice of their own shepherd, so the people would have learned to know what teaching agreed with the teaching of Jesus and what teaching went against it. The first Christians had to learn that the voice of Jesus might still be heard in the words of Scripture, in the words of the people around them, and through the working of the Spirit.

Do we follow him with that degree of trust? Sheep know the shepherd is reliable, otherwise they would not follow, have we such confidence in Jesus when we follow him? Sheep are easily alarmed, sheep take worries seriously, sheep will easily go astray, but, given the opportunity, they will follow the shepherd. Among our concerns, our worries and our mistakes, have we a commitment to following the shepherd?

The sheep belong, the sheep hear, the sheep follow, and the sheep will never perish; in Verse 28, Jesus says, “I give them eternal life, and they will never perish. No one will snatch them out of my hand.” The opponents of Jesus would have been divided about the idea of eternal life. The Gospel accounts written by Matthew, Mark and Luke all mention that the Sadducees believed there was no resurrection. The Pharisees did believe in a resurrection and if we read Acts of the Apostles Chapter 23 Verse 6, we find Saint Paul dividing the Sadducees and the Pharisees by saying, “I am on trial concerning the hope of the resurrection of the dead.” Jesus’ listeners would have been familiar with the idea that there would have been a life in a world to some, but Jesus is the only one who says he offers that life and that those who accept it will never be taken from him. Sheep may have perished in many ways, it took a very good shepherd to save them from all dangers; Jesus is saying he is such a shepherd, that no-one will ever take a member of his flock from him.

Have we confidence in a life to come? Have we confidence that whatever happens, we will never perish because we have eternal life? Had sheep been able to understand that there were no dangers, wouldn’t they have lived very differently, lived without fear and anxiety and alarm? If we have eternal life, there are no dangers, for what danger can there be for someone who will never perish? Do we live our lives in the light of such knowledge, or do we live as though there were no resurrection? 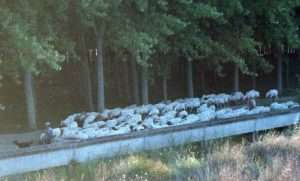