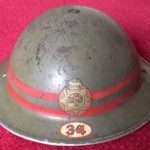 My grandfather was a gentle and dapper man who died from cancer at the age of 65. In memory, he is sat in his fireside chair sorting through the stamp collection he had built up over the years, or he is in his garden tending chrysanthemums, or working in his greenhouse, or weeding the rows of vegetables. He was quiet, very softly spoken, it would have been hard to imagine he had ever raised his voice. He would have been uneasy in our current age of nostalgia for he never told stories from his past.  Even his years in the National Fire Service in London during the Second World War were never recalled.

The only evidence that the quiet man had seen at firsthand the devastation of the London Blitz was a battered fire helmet that lay in the spare room. Even my grandmother, a more talkative person, recalled only the odd reminiscence, there was a memory that my grandfather had once worn the same clothes for three weeks because the bombing and ensuing fires had meant there was no time to change, and there was a story that once he had gone up a ladder and had gone in through a fourth floor window of a burning building, only for the building to collapse and him to come out of the ground floor door.

Post-traumatic stress disorder was not something talked about in such times; there was an awareness of “shell shock” from the First World War, but after the Second World War there must have been hardly a person in the country who had not been profoundly affected. There was an attitude that one should get up, dust oneself down, and get on with things. There was a BBC radio programme, perhaps fifteen years ago, perhaps marking the sixtieth anniversary of the London blitz, where people were telephoning with their own particular memories. A man called and described how as a boy he and his mother were walking to the school he attended, a schoolfriend was walking with them; there was an explosion and they were showered with rubble. The man and his mother survived, the schoolfriend was killed. His mother told him to get along to school and to apologize to his teacher for being late.

Perhaps just trying to keep going is all one can do, but the memories can still be haunting, troubling, decades later. This weekend marks the seventy-fifth anniversary of the Belfast blitz, the worst night of which claimed nine hundred lives. At the time of the fiftieth anniversary, I talked with a man who had been an air raid precaution warden in the city on that fateful night. He described the fear and the flames and the disappearance of one of his colleagues after an explosion, “We found his body in the end, it was on the roof of a house – two streets away.” How does one begin to cope with such horrors?

What thoughts went through my grandfather’s mind as he stuck stamps into albums, as he stood in silence and pondered his garden?

Whatever memories there will be of our times, they will be considerably easier than those of 1941. 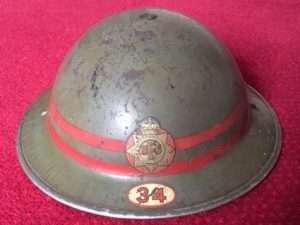