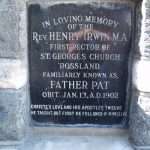 Francis Baring, the merchant banker, was born on this day in 1740. His name once prompted our discovery of the story of a Church of Ireland priest from Co Wicklow.

Sitting one morning in the British Columbian town of Revelstoke, I had picked up a local history book. Revelstoke had been named after the British peer of that title, a Baring who had secured funding for the railway. “Lambay Island – the Barings owned Lambay Island,” I said aloud to my mystified family.

Whether this piece of information was still correct on that morning in 2008, it gave Lord Revelstoke an interesting angle. How many people would have connected a little island off the coast of Co Dublin with a town on the Canadian Pacific Railway?

The book described how Lord Revelstoke had supported the first Anglican chaplain who came to work in the lawless communities of the region in the 1880s. The chaplain, who became a legend in British Columbia was the Revd Henry Irwin, otherwise known as “Father Pat”. Father Pat was a heroic figure, known more for the things he did than the things he said. He worked himself into a state of mental and physical exhaustion and was sent home to his native Co Wicklow. Pursuing our inquiries, the curator of the Revelstoke Museum, had told us that after his return from Ireland Father Pat was sent to work in the mining community at Rossland, some two hundred miles or more south of Revelstoke. “There is a memorial to him at Rossland”.

So, one afternoon, after our journeying had taken us from Revelstoke to the town of Nelson, we drove south to the beautiful town of Rossland. Father Pat’s memorial stood prominently at the corner of Columbia Street and the staff of the town library were exceedingly gracious in finding and photocopying everything they had on him.

Father Pat’s life was filled with sadness. His wife and firstborn child died during childbirth and he never came to terms with his grief. When his health finally collapsed completely, he was sent home on leave, but for some reason left the train in Montreal. He was found wandering the streets, very ill, and although being admitted to hospital, died there at the age of 42.

Why was Father Pat important? Because he was an old boy of our children’s school. Our daughter said that for the previous four years she had sat in the school chapel six mornings of the week and had looked up at the stained glass window in Father Pat’s memory and had never given him much thought. Standing in Rossland that afternoon the name engraved in the glass became a real person – and if there had not been an association with Lambay Island, the Irish connection would not have been pursued and we would not have discovered the story of Henry Irwin.

It is on such tenuous links that we live. 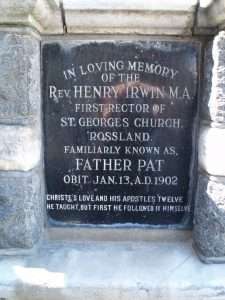