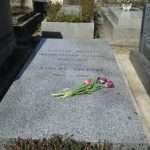 The cemetery at Montparnasse seemed a fitting end to a week in Paris. Visitors were wandering along the avenues, perhaps seeking particular graves, or perhaps just just enjoying the tranquility of the place. Near the middle, a cluster of smartly dressed people were gathered around a cleric who was making the sign of the cross over an ornate casket. The temperature had risen sharply since morning, and the group of mourners, dressed in funereal black, looked uncomfortable under the bright afternoon sunshine.

Parisian cemeteries, of which Montparnasse is one of the most famous, are a fascinating experience; there are graves of the great and the good, the rich and famous, epitaphs describing the attainments and the qualities of the deceased. Lengthy inscriptions extol the virtues and unsurpassed merits of some of those interred in the soil. Words like “chevalier” and “honneur”are liberally scattered. Awards seem plentiful. An ordinary person, whose life had been marked by nothing more than honesty and kindness, might feel intimidated at the prospect of being buried among such high achievers.

The journey to Montparnasse had only been made with the intention of visiting a single grave, it was while searching the map at the gate that I saw another I felt I should visit.

The grave of Jean-Paul Sartre and Simone de Beauvoir was the one I felt I should visit. It is marked by no more than a plain headstone inscribed with their names and dates. Reading novels by Sartre in younger days was never easy, but he was a major influence in Twentieth Century thought and that was enough to prompt the short walk necessary.

The real purpose of going to Montparnasse, though, was to return to the grave of Samuel Beckett. Having known Beckett’s family, I knew he would be pleased that he has a memorial that is even more unassuming than that of Sartre and is difficult to locate amongst the rows and rows of graves. While the graves of many of the famous are marked with many mementoes left by visitors, the grave of Suzanne and Samuel Beckett was today adorned only by a small bunch of wilting flowers and a single cigarette. It seemed the sort of detail he might have included in one of those depressing plays he wrote.

Beckett’s inscription has no more than the barest of details. No biographical information, no hint that these human remains were once inhabited by a genius. The man who sent his agent to collect his Nobel prize would probably be pleased that he is now hardly noticed. I, on the other hand, think it is a pity that we now inhabit a world where celebrity is exalted and where genius is pushed aside, and I stood for some minutes telling him so; not that he was listening. 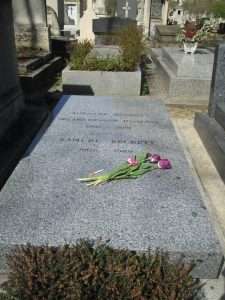