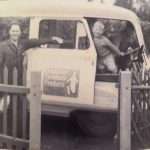 In a generation’s time, who will remember such businessmen? In a radio play this evening, there was a  character who was a travelling salesman, going from door to door selling clothes. A delay in the traffic allowed a moment to wonder how such a business functioned? Did he carry stock of all sizes with him, or did he carry samples and take orders? And how did the payments work, was it cash on delivery, or might he spend months calling at houses to collect a few shillings each week?

Fifty years ago, there was such a travelling drapery business run from a shop in Somerton. Not once in the intervening period, have I stopped to ponder how it worked.

Some businesses were more predictable than door to door drapery. Our village had a milkman, “Nipper” Knowles, who worked for Cricketer Dairies at Cricket Malherbie and called six, if not seven, days of the week. By mid-morning Alan White, a newsagent from Langport, the town three miles distant called with that day’s paper. Maisey’s bakery van, driven by Den Legg, called three times a week with fresh baked bread). On a Monday, David Macey’s mobile shop came at teatime; there were neighbours who would have bought shopping, but for children the attraction was the selection of sweets he carried. On a Monday evening Mr Bryant, the hardware merchant from Somerton did a round; we bought paraffin for the heaters from him, though he presumably carried a stock of other items. On a Friday lunchtime, a fishmonger did a round, in those days when people still ate fish. By Friday teatime, there was the sound of the Reema ice cream van, though he never seemed to get the level of custom enjoyed by the Wall’s ice cream van that came down the road on a Sunday teatime.

The age of the travelling businessman was very short. When did it really become established? Probably in the post-war era when vehicle ownership became affordable for a wide section of the population and when rising standards of living meant that people had cash to spend. Perhaps it hasn’t gone away altogether, doorstep delivery of milk still takes place, newspaper rounds are still done and, perhaps mobile shops might still roll around country roads, but it has become a very uncommon way for people to do their shopping.

Being a travelling salesman was a precarious trade at the best of times, and the most precarious trade of all must have been door to door drapery. In a generation’s time, it will probably seem as odd an occupation as that of the knife grinder and the pamphleteer. 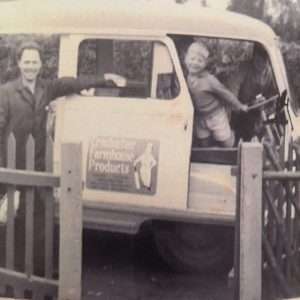