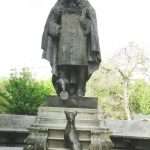 It had been ten years since I saw the statue. With the whole family present on the last occasion, and with there being little enthusiasm for spending an afternoon of the summer holiday in the Sixteenth Arrondissement visiting an art gallery, there had been little time to stop and ponder anything along the way. The statue appears among the hastily taken snaps in the holiday album, but hadn’t been a cause for reflection. If anyone had asked, I might have suggested it was perhaps Lord Ranelagh, whose gardens in London had been the inspiration for the Jardin du Ranelagh.

Last week, there was time to stop and stand and wonder about the sculpture. Who was this man watching a crow and a fox? Was he protector of the crow? Was the crow taunting the fox? Were the fox and the crow symbolic figures?

The Internet provides an opoortunity for asking unlikely questions, such as “what is the crow and fox staue in Ranelagh?” The answer it provided was unexpected, the sculpture depicted one of Aesop’s Fables, stories with a moral from between 620 and 560 BC.

A CROW having stolen a bit of meat, perched in a tree and held it in her beak. A Fox, seeing this, longed to possess the meat himself, and by a wily stratagem succeeded. “How handsome is the Crow,” he exclaimed, in the beauty of her shape and in the fairness of her complexion! Oh, if her voice were only equal to her beauty, she would deservedly be considered the Queen of Birds!” This he said deceitfully; but the Crow, anxious to refute the reflection cast upon her voice, set up a loud caw and dropped the flesh. The Fox quickly picked it up, and thus addressed the Crow: “My good Crow, your voice is right enough, but your wit is wanting.”

The fable appears in the work of Seventeenth Century French writer Jean de La Fontaine, where the crow is holding a cheese rather than meat, and was a story learned by generations of French primary schoolchildren. French children would presumably have instantly identified the animals depicted in the Jardin du Ranelagh, but what about the human figure? With the wig and garb, he might have passed ad Lord Ranelagh, but he is the fable-teller, presumably contemplating the folly of the crow.

It was a strangely troubling thought. The idea that someone would watch the folly of another and not intervene, even if only to offer a word of advice, to ask if the consequences had been considered.

Perhaps those who grew up hearing the fables would have needed no such advice. Perhaps the troubling thought arises because we have forgotten such old wisdom. 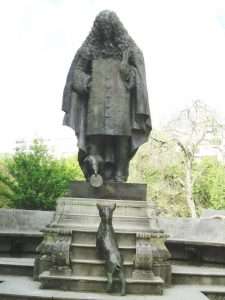