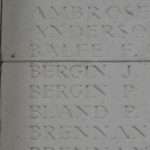 I went to look for the Bergins. Private Jeremiah Bergin was born in Mountrath and enlisted at Castletown. He was a member of the Second Battalion of the Leinster Regiment and was killed in action on 20th October 1914. Private Patrick Bergin was born in Mountrath and enlisted at  Portlaoise, which was then called Maryborough. No age is given for Jeremiah, Patrick was just nineteen years old when he died. Neither of them have a grave, not enough of them remained to identify them, instead their names appear on the Ploegsteert Memorial in Flanders. Engraved in the stone, their names simply appear as, “J.Bergin,” and “P.Bergin,” it is not much of a recognition of lives of two brave young men.

Scripture teaches us that every person is of infinite worth, that there is no person who does not count, but look at our recalling of the past, and ask if everyone has been treated with equal dignity. Where are Jeremiah and Patrick Bergin commemorated apart from the seven engraved letters of their initial and surname on a monument in Belgium that few of us have ever visited?

The aspiration of the 1916 Proclamation was that all the children of Ireland would be cherished equally, this must surely mean that their memories are also cherished equally? If there is ever to be reconciliation with Northern Ireland it will only come when there is an acknowledgement of the legitimacy and the dignity of all the traditions on the island. It does not mean that we have to share the views of the other person, just that we respect their right to hold them. If we cannot do this, then our future will be as divided as our past. If Jeremiah and Patrick Bergin are not worthy of the respect and dignity accorded to other men who died for their country, then reconciliation remains very far away. 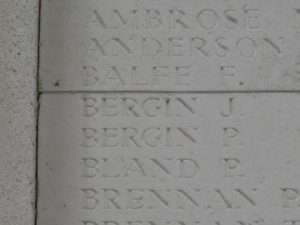