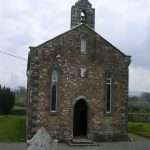 “L” for “legends”. We were discussing the traditions of Celtic Christianity in school, traditions that include the legend of Saint Kevin and the Blackbird. Kevin was standing with his hands outstretched in prayer when a blackbird came and built a nest in his hands and Kevin continued to hold his hands out until the blackbird had hatched its eggs. Does anyone believe that?  Of course, no-one believed it—so what had been the point of such stories? The legends of Setanta and Cuchulainn were recalled; did anyone believe those? They didn’t believe them, but the stories had a great place in popular culture.

The stories were about the second letter, “i” for “imagination.” The Church developed stories about their saints being as powerful as the old Celtic heroes; it was about appealing to people’s imagination rather than to logic. How often do we use our imagination? In times when every graphic detail of human existence is brought to us in high dimension, are there ever moments when we just stop and think and allow our imagination to work? Imagination helps us to see things in a different way; to understand ideas in ways we might not have thought possible.

Losing the capacity for imagination means that even reality loses its strength. It becomes something we see on television; something reported in the newspapers; something that might one day appear in our books in school; but often it does not become something that is personal to us. Imagining being in those places brought to us by the news channels, imagining standing in the place of those interviewed might leave us very vulnerable, better that we keep things at arm’s length than let reality come too close..

The loss of the power to imagine meant the loss of our third letter “g” for God. The loss of people’s ability to think about God came about because of a loss of imagination.

What I think Jesus wants us to do is to use our imagination. God in himself is beyond all understanding, but Jesus wants us to grasp after some insight into God. Believing in Jesus, following him, demands this leap into the unknown, into thinking in a way where everything cannot be explained.

To think that way brings us to the fourth letter, “h” for Holy Spirit. “When the Spirit of truth comes, he will guide you into all the truth,” says Jesus in Saint John Chapter 14 Verse 13. Jesus does not explain what that truth will be, only that the Spirit will lead us into it. The Spirit cannot be encountered in a rational scientific way, the Spirit can only be met in our imagination, in our emotions, in those parts of our mind that are not caught up with statistics and numbers and measurements.

The Holy Spirit is the one who leads us to our final letter, “t” for truth. God cannot be fully real to us unless we approach Him with our whole person;. Jesus promises his disciples when they reach out into the unknown, then God will be there with them, “I still have many things to say to you, but you cannot bear them now,” says Jesus. The truth will be found when they reach out, when they will find him