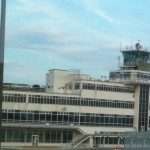 Terminal 2 in Dublin Airport was uncrowded. There was time for hot chocolate and pain au chocolat before heading for the departure gate. The boarding card said the 0640 flight would open for boarding at quarter past six. Nonchalantly, I walked toward gate 422. Passing a queue at the gate before it, there was a moment of panic. There was no queue at gate 422, not a soul. Hastily, I looked up at the monitor to assure myself I was at the right place. “Final call,” it announced for the flight to Brussels. Final call? It was only twenty past six.

I hastened to the desk, handing over my boarding card and passport, and then hastened down the air bridge, one of the last to board the flight. For a few moments, it had been 1993 again.

In 1993, for the first time in my life, I had flown to London for a meeting. It had been a day looked forward to with great excitement, such things were not the every day reality of country clergy.

The purpose of the day is long gone from the memory, even its location is forgotten, the most important moment of the day for someone aged thirty-two, but a teenager at heart, came in meeting an old friend in a Holborn pub at six o’clock. A banker who criss-crossed the Atlantic, his lifestyle was exceedingly more exotic than that of someone living in a rural corner of Ulster, but for one moment, it felt that our worlds met.

The two hour encounter of the different worlds caused the problem. Suddenly it was eight o’clock and there was the matter of catching a 9.25 pm flight.

Attempting to remain nonchalant, the walk to Holborn tube station was anxious. The train seemed to take an age to arrive and then for some reason everyone had to leave it at Barons Court. It was 8.30. How many more minutes to Heathrow? If the first train took an age to arrive, the wait for the second lasted an eternity. It seemed to crawl. It was after nine before Terminal 4 was reached, and then the train paused while minute after minute ticked away.

The tube station for Terminals 1,2 & 3 was reached at 9.25, the departure time. The run from the station was made with a pounding heart. “Sir, the flight has closed”, called a member of the ground staff.

“Keep running”, said a voice inside, “keep running”. The airbridge was reached and the noise of of running steps echoed inside it.

A steward stood in the doorway of the plane and glared. “Sir, you are very late”.

It was ten minutes before it was possible to breathe properly. A delay in the arrival of catering trolleys had held the flight up and made the run worthwhile.

Trying to reach that flight became the stuff of nightmares in the years that followed, there was a recurring dream of being in a taxi in Croydon knowing that a flight from Heathrow took off in an hour’s time.

Sitting in the plane this morning, I reassured myself, this was not 1993. 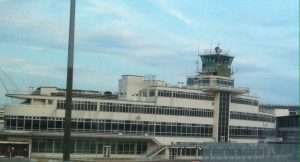