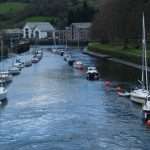 A Facebook comment from a family member complained of the traffic congestion on the M5 motorway. Having lived in Ireland for more than thirty years, English bank holiday weekends are easily forgotten. Even in January, driving through England was a shock to someone used to the tranquility of the Irish Midlands, what those roads must be like on a Saturday in early summer is hard to imagine.

Strangely, the M5, which runs from Birmingham in the Midlands to Exeter in Devon always had an element of excitement about it; no matter how prosaic the six lanes of tarmac might appear, they could evoke a mood of optimism and anticipation.

Perhaps it is being in Ireland for more than thirty years that has bestowed a romantic quality on an English motorway. In the years in which we lived in Northern Ireland, the M5 had that “almost there” feeling. A ferry from Larne at 8 o’clock brought us to Cairnryan by ten and the beginning of the long drive, east to the English border and the journey south. No road map was needed A75, A74, M6, M5. The M5 was reached by around four in the afternoon, by the time Bristol was passed, it formed the final straight.

The signposts became familiar, reciting the placenames brought home closer. Crossing into Somerset, there was a sense of being back among the towns and villages of childhood, a sense of security, reassurance. The M5 motorway had been the outward gateway in youthful days, the path to other places; by the 1980s it had become the way the way back.

There had been many summertimes when crossing it on the way to Bridgwater or Taunton when I had pondered those who travelled it, the constant lines of those bound south-west, what had they thought on their slow progress to the next point where the traffic came to a complete halt? There must have been something special that drew them onto this road year after year, knowing what a day lay ahead if they were to reach their destination.

Few of them left the motorway in Somerset, it was the seaside resorts of Devon and Cornwall that they wanted to reach. Our county was beautiful and historic and filled with unexpected delights, but such things could not compete with beaches and boats.

Maybe someone has researched those who travel on bank holiday Saturdays, studied what it is that compels them to endure such days, at the heart of their motivation there must be just a little sense that the M5 was a motorway that would bring them to excitement and romance. 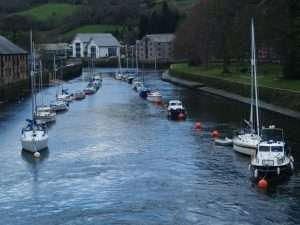