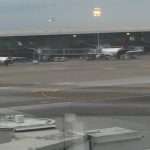 United Airlines flight 1405 from Belize City to Houston George Bush Intercontinental Airport in Texas was reported as taxiing to the runway ten minutes late because of the late arrival of the inbound flight.  The United website says the aircraft is a Boeing 737-900 and that for economy class passengers snacks are available for purchase. The short delay at Belize is not a cause for concern, there is a four hour interval at Houston before the overnight flight on a United Airlines Boeing 787 Dreamliner to London Heathrow where a hopefully on- time arrival will allow a quick connection to an Aer Lingus flight to Dublin. The Flight Aware website allows a minute by minute tracking of the flight, just in case there is any curiosity regarding its progress.

Miriam is on her way home. As soon as she stepped aboard an American aircraft, there was a feeling that she was back in a safe world. Her three week sojourn in Central America, visiting Guatemala, Costa Rica and Belize has concluded without serious mishaps, no encounters with violent crime or road accidents.

Perceptions of safety are very much relative to the situations in which one finds oneself, sometimes there is a feeling of security in situations one might ordinarily find threatening. Visiting the Philippines in violent times a quarter of a century ago, safety meant being back in Manila, or at least back in a hotel where an armed guard stood at the door. Travelling across Tanzania with two African companions, safety meant being in their company. Visiting a friend in Burundi on three occasions, safety meant crossing the border into Rwanda. Sometimes feeling safe is an entirely subjective emotion, sometimes feeling safe can induce a dangerous sense of complacency.

An annual visit to Flanders and the Somme last month allowed time to wonder at the human capacity to make the best of appalling situations, to wonder at the resilience of spirit that allowed song and laughter in places from which sane people would flee, to wonder at the locations those soldiers regarded as “safe.”

The people among whom Miriam travelled in Guatemala would probably have laughed at the idea that their country was anything other than safe, just as my Burundian friend laughs at my expressions of concern at the speed of his driving and at his propensity not to slow down when approaching army checkpoints.

FlightAware says that Miriam’s flight is now over Mexico, heading toward the coast. 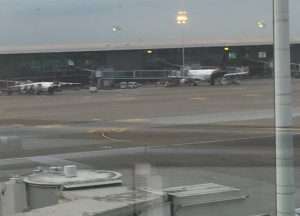