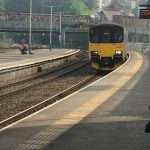 Railway travel has not the elegance once possible, the 1715 service from Newport to Taunton might once have had a locomotive and carriages, now it is a four car diesel multiple unit. The seating is utilitarian, not built for long journeys. Travelling eastward, lines join from the right and the left, the reason for the convergence becomes apparent, the Severn Crossing toll booths on the M4 motorway are visible from the window, the lines will run in a tunnel beneath the Severn.

If any station has been omitted from the list of stops, it is hard to recall what it might be. Once Bristol is reached there seem few possibilities that have been overlooked. There is a poetry in the way in which the stations are announced, a rhythm that lulls one into a sense of ease where the name of a stop might be missed: Severn Tunnel Junction, Patchway, Filton Abbey Wood, Bristol Temple Meads, Bedminster, Parson Street, Nailsea & Backwell, Yatton, Worle, Weston Milton, Weston-super-Mare, Highbridge & Burnham, Bridgwater, Taunton.

Approaching the great cathedral of railway architecture that is Bristol Temple Meads, the train slows to walking pace. An announcer tells us the slow progress is because we are following a late-running service to Weymouth and that our routes will diverge at Bristol. To be travelling to Weymouth on a fine June evening would be an enviable prospect, to walk the promenade and sit on a bench and eat fish and chips. The train passes so slowly through Stapleton Road station that, in days when carriage doors could be opened by the handle on the outside, someone might have run and leapt aboard.

Temple Meads is a wonderful declaration of Victorian confidence, a statement that engineering and science would shape the religion of the new age. The railways effected a revolution as profound in the Nineteenth Century as “smart” technology is in the Twenty-First, journeys that once took days now took hours.

Commuters fill the carriage and the luxury of spreading a jacket, case, laptop and book across four seats is ended. It is hard to imagine that they ever feel the need to give much  thought to Brunel and the ways in which his genius helped to change the landscape of the country and the fabric of ordinary lives.

It’s hard to imagine Brunel would have been overly impressed by the journey time of four and a half hours from Chester to Bridgwater, and would have been baffled that anyone might travel through the Welsh Marches to Newport before catching a train to Somerset when the obvious route would have been through Birmingham, but he didn’t have to cope with a fares that cost three times more to travel on obvious routes.

What is reassuring is that the trains have been busy, that opportunities for spreading out, even in the rearmost part of the train, have been limited, and that the poetry of railway station names will continue to be recited for at least a few years to come. 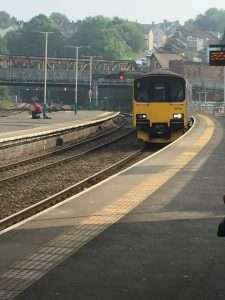