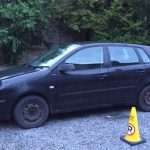 Back in the Eighties there was a joke that one bought a Mercedes Benz for the engineering, a BMW for the style, and a Skoda for the heater. In the days when the Communist Party ruled Czechoslovakia, before Skoda was allowed to re-emerge as a builder of fine cars, there may have been a small element  of truth in the humour. Sliding behind the driving wheel of a thirteen year old Volkswagen Polo, there was cause to ponder its virtues, one of which was not its radio. It offered a great menu of wavebands and sound options, but the process whereby one found RTE Radio 1  was an arcane mystery. Attempting to simultaneously move off and tune the radio resulted only in stalling the engine.

The Polo is a reassuring car. It has its own character, its own idiosyncrasies, it requires one to become acquainted with it. It covers the ground at an unexpected pace and firmly hugs the road.

The Polo is only necessary because the Peugeot 207 that takes me around the roads of Laois and Offaly decided this evening that it would not wait until tomorrow morning for new brake discs. The service had been booked, the new discs had been ordered, but while driving a narrow back road to go to a house to arrange a funeral, it became clear the problem was critical. A grinding, scraping noise was unmistakably that of metal against metal.Even clergy know that friction causes heat and heat can can cause fires, so it was with a degree of trepidation that the journey was made to the house of master-mechanic Eric.

“Do you want to borrow the Polo?”

Rural Ireland may lack many of the amenities of the cities, but there are some things in which it is unmatched. It would be hard to imagine driving to a garage in Dublin at half past seven in the evening, knocking at the mechanic’s kitchen door, and being invited in for a cup of tea before being allowed to drive away in one of the family’s cars. What’s more, one of the sons was sent to put petrol in the car before handing me the key.

Driving the Polo was a renewal of an acquaintance that had begun when it kept me mobile for a day last winter. I had known it had a feisty quality. I even managed to find RTE Radio 1 in time for the nine o’clock news; that the news was in Irish, and was beyond my comprehension, was almost something that might have been expected. 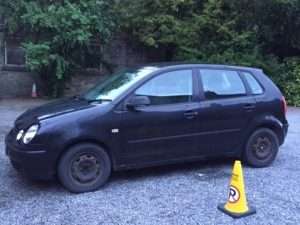