I like first class cricket, the sort that is played in matches lasting four or five days – it has a reassuring certainty, when there are results, they are results that are beyond question. Sometimes the requirement of absolute certainty creates scenarios that would be considered bizarre in other sports.

If, in the first innings, one team has scored 50 runs and the other team has scored 500; and then, in the second innings, the first team has scored 50 runs for the loss of nine wickets and is 400 runs beyond with one wicket standing, when the time runs out, then the match is a draw. It would have been most improbable that there would have been a world record-breaking stand of more than four hundred runs that would have required the second team to bat again, almost certainly the tenth and final wicket would have fallen with the first team still hundreds of runs behind, but no-one would ever know; both sides knew the rules and both sides knew the match was drawn. It might have been extremely frustrating for the high scoring team, but they could not have complained.

Even worse than that scenario, a team might be all out for 50 runs in both innings and its opponents score 100 runs in a single innings, but unless the opponents get a chance to bat again and score the single run needed, the match is tied because the side that had scored 100 runs in one innings might have been all out for 0 runs in the second innings and, because there has not been time to bat again, no-one would ever know.

Sometimes international politics would be much simpler if the standards of first class cricket were applied.  In international cricket there is no need to try to interpret what a test match result might mean, the international cricket council is able to be definitive in its decisions and rankings because the rules of the matches leave no-one in any doubt. Were the business of politics to be so clear and unambiguous, debates and disputes might be quickly settled and rancour and bitterness be avoided. Of course, such a situation can only pertain in first class cricket because many, if not most, matches end inconclusively; most politicians could not contemplate a situation where there were no bragging rights. 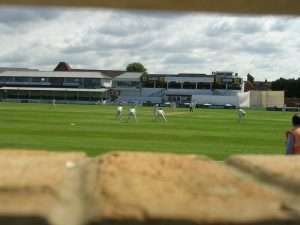