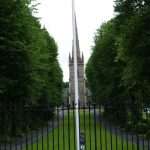 The Sixth Sunday after Trinity was the first Sunday after I arrived in Ireland to spend the summer of 1982 in Co Down. Going along to the parish church on a July evening, the hymn board hanging on the pillar at the head of the nave had “Trinity 6” at the top. Black lettering on thick white card reminded worshippers that the passing of the church seasons was something taken with seriousness.

The Sundays of that summer remain fresh in the mind. No Sunday was complete without attending Evening Prayer in a church where there was an abiding sense of the beauty of holiness. There was time to contemplate every detail of the building while my young fiancee spent half an hour before the service in the bell tower as one of the ringers. Even on summer Sundays the faithful still gathered in respectable numbers, quietly entering the church and taking their places in the box pews that were part of the character of the place. A be-gowned sexton stood at the door handing out the black books that combined the Church of Ireland’s version of the Book of Common Prayer, a 1926 revision that had excised most of what rigorous Protestants regarded as “catholic,”and the 1960 edition of the Church Hymnal, a book that had virtually nothing from the Twentieth Century.

The worship was traditional, structured, hierarchical. The rector entered at the back of a procession of robed choristers, his voice loud and clear and authoritative. The Cranmerian liturgy was conducted with impeccable dignity, each hymn, each canticle announced with clarity, each prayer read with a sense of gravitas.  The choir chanted the psalm, the Magnificat and the Nunc Dimittis. “The Collect of the Sixth Sunday after Trinity . . .,” the word “collect” being pronounced with the “co-” being pronounced as one would pronounce the “co-” in the word “cot.” The sermons were thoughtful, structured, reasoned; removed from the turmoil of the events that so often surrounded the place.

I loved attending those services. A twenty-one year old undergraduate at the London School of Economics, I knew the world outside, but in this small town church there was a sense of otherness, a sense of the numinous. Strangely, the Church of Ireland mostly chose to throw away what made it distinctive, what created a sense of holiness, opting for the banal and the electronic instead. Were a twenty-one year old Englishman to venture into a church on a Sunday evening, he would not find those things that made that summer so special. 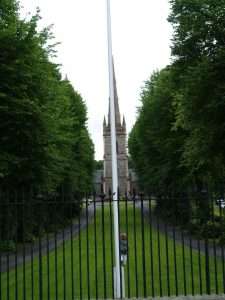