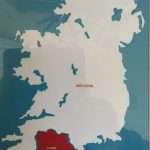 A map that showed Ireland as having two zones, “Cork” and “Not Cork.” Having Cork friends, I would be cautious about dismissing the map as entirely inaccurate, Cork tends to be regarded by them as a place apart from any other.

The Cork people are not the only ones to define the world in terms of where is their place and where is not their place. A friend in the North once talked of defining the world in terms of three zones: there was Portadown, as far as Belfast, and beyond Belfast. Of course, this placed Larne and Bangor in the same zone as Australia, but the person would have been to Larne and Bangor about as often as they had visited Australia, so it wasn’t too illogical as a division of the world.

Don’t we all tend to perceive the world in egocentric terms, perceiving the world in terms of our own experience of it?

A woman I knew in the North came from Cumbrae in the Firth of Clyde. Blessed with a wonderful sense of humour, she would tell a story of the minister on Great Cumbrae who would stand in the kirk on the Sabbath and pray for the islands of Great and Little Cumbrae and for the offshore nations of Scotland and England. Of course, the reverend gentleman offering intercession on Sunday would have been technically correct, if one’s world is centred upon a Cumbrae, then the whole of the world is offshore.

Recent political developments in Britain have shown an enduring tradition of people seeing their own small country as being at the centre of the world. The old joke about the newspaper headline that announced “Fog in the Channel, Continent Cut Off,” had about it a kernel of truth; insularity has not gone away.

No-one would regard the sense of pride found in the county of Cork a negative thing, any more than one would be critical of the strong sense of identity to be found in the neighbouring “Kingdom” of Kerry. Local pride, strong local and regional identities, can contribute much to the sense of well being experienced by local communities. There seems a point though when a line is crossed; perhaps it is a line that is not reached until national level, but there comes a point when pride becomes prejudice, when good humoured banter can become something altogether more sinister.

If defining one’s world was no more threatening than colouring part of a map in rebel read,  it would be a much safer place. 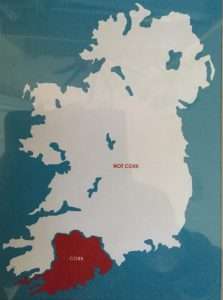