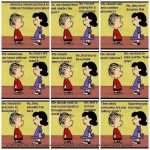 Today’s Financial Times reports on a battle between Banco Santander of Spain and Sparkassen of Germany over which has the right to use the colour Red HKS 13 in Germany. The Financial Times notes that this is not the first such corporate spat, “Cadbury and Nestlé fought over a shade of purple known as Pantone 2865c, while a subsidiary of AT&T and T-Mobile clashed over the use of ‘magenta.'”

When did corporations acquire the right to the exclusive use of colours? Aren’t colours the property of everyone? What if every company decided to trademark a colour? There would be none left in the public domain and the use of any colour by ordinary people might invite litigation from the corporate owners. What’s more, who gave any government body the right to grant to a company the exclusive usage of something that a government body did not, and could not, own?

The privatization process does not just extend to colours, logos and trademarks, there is the privatization of commonplace words. Next month’s Olympic games in Brazil are branded “Rio 2016”? Who gave anyone the right to claim two common words as their own, to register “Rio 2016” as a trademark? There must be numerous events, sporting, cultural, religious, political, where the venue is Rio 2016, would the organizers be challenged if they used the term? The privatization process extends even to the patenting of crops. For millennia, the skills of cultivation were something to be shared, but now corporations are acquiring the rights to particular plant strains.

The private ownership of what was formerly public is about protecting and extending market share, it is about profit.

Once there were Christians, particularly evangelical Christians, who would have protested at such developments. The radicalism of some of the Seventeenth Century evangelical groups was what attracted me to Christianity, their conviction that all things belonged to God so all things must be shared according to his standards of justice and mercy. Such Christians are rare now, we might declare Sunday by Sunday that all things belong to God and whatever we give is his anyway, but we don’t really believe it; we remain silent as profit becomes the sole arbiter of decisions. There is a Peanuts cartoon strip that mocks those who claim to uphold Biblical principles when their only venture into the public forum is to oppose same-sex marriage, like most humour, it has circulated because it contains a large element of truth.

Jesus of Nazareth, who warned against having profit as one’s only motive, would have had much to say about those who fight court cases over the right to a colour, but who would listen to him? Were the tale of Noah and the Ark being written in 2016, their would need to be careful consideration of whether the colours of the rainbow infringed any copyright held by a corporation. 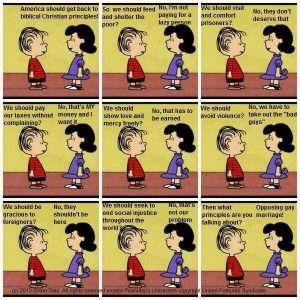