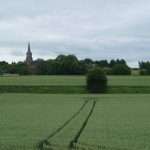 A hundred years ago tonight, Lieutenant Thomas Kettle of the Royal Dublin Fusiliers wrote his best known poem, a poem that captures a sense of loss and of being misunderstood; a poem that anticipates a version of the history of Ireland where he and those who fought in the Great War would be pushed to the margins of history. Tom Kettle had a moment of prescience as he sat in a trench on 4th September 1916 and wrote, “To My Daughter Betty, The Gift of God”

In wiser days, my darling rosebud, blown
To beauty proud as was your mother’s prime,
In that desired, delayed, incredible time,
You’ll ask why I abandoned you, my own,
And the dear heart that was your baby throne,
To dice with death. And oh! they’ll give you rhyme
And reason: some will call the thing sublime,
And some decry it in a knowing tone.
So here, while the mad guns curse overhead,
And tired men sigh with mud for couch and floor,
Know that we fools, now with the foolish dead,
Died not for flag, nor King, nor Emperor –
But for a dream, born in a herdsman’s shed,
And for the secret Scripture of the poor.

Among Tom Kettle’s men were many from the city of Dublin. Men who had joined the army not for flag or king or emperor, but because they had been able to find no regular work since the 1913 lockout, or who lived in such poverty that even army life seemed attractive. Poverty in Dublin was extreme, tens of thousands living in appalling tenement accommodation, infant mortality running at 142 per 1,000 births (i.e. one baby in seven died), tuberculosis being rife in the poor districts; what is surprising is that social unrest in Dublin was not greater.

Perhaps the working class men who came home from the Western Front might have hoped for better things, might have hoped that in the new Ireland that came in 1922, the working classes would not be overlooked. The constitutional question had been settled by Irish independence, now there was the opportunity to deal with the types of political issue that were paramount in most European countries. Instead, the 1921 Treaty brought a civil war and the formation of pro- and anti-treaty parties. Working class people organized, but never achieved the level of influence necessary to ensure the issues affecting them were addressed.

The sacrifices of September 1916 did nothing for the Dublin poor – “we fools,” wrote Tom Kettle. A hundred years later, he would have seen no reason to change his opinion. 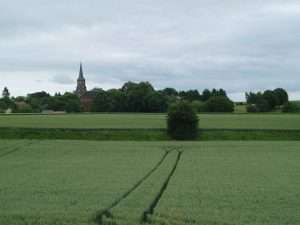