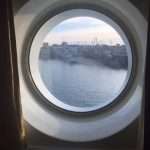 The view through the porthole was of a tranquil late-September evening. The forecast talked about after-effects of Tropical Storm Karl, but one would have had no sense of apprehension as the Pont Aven sailed from Roscoff. On a 41,000 ton vessel, how could one be worried about the wind, even if it did have a name?

Living on a road that led to a windmill, it was natural to expect that the wind would blow strongly. Sometimes it did, sometimes there were gales, but gales were not of much use to a mill, what it needed was a persistent wind, a wind of a consistent strength, and it is the persistent wind that remains in the memory. The mournful sound it generated as it blew through electric wires evokes a sense of grey skies, dark days and rural isolation.

The wind has a surreptitious power to make its presence felt; the warmth of summer sunshine nullified; a shower transformed into driving rain; a snowstorm strengthened to a blizzard. Being with a friend in a small boat on Galway’s Lough Corrib one summer afternoon, the moment was changed as a sudden gust announced the arrival of a violent squall that threatened to capsize the boat. He muttered something about the fairies; it wasn’t the fairies, it was a straightforward meteorological phenomenon.

Much as the wind could play havoc with life in rural England, it was never so persistent that its presence in particular localities merited a name.

In France, where, admittedly, even the motorways have more than impersonal numbers, there are winds that blow with such strength and consistency that they have their own names. The Mistral is the most famous. Travelling south along the Rhone valley one summer, there was a forcible sense of its presence; it was hard to imagine what it might be like in the winter. It is said to blow for weeks at a time and there are tales of people being driven mad by the noise it constantly generated and by having each day to deal with its strength. At the eastern end of the Pyrenees the wind is called the Tramontane; it blows from the north-west and is claimed to clear the clouds from an area that claims more sunshine hours than the Riviera.

Does naming the wind somehow make it less? Does it personalise it and so deprive it of its potential to break and destroy?

Karl’s presence became manifest a couple of hours out of port, even a 41,000 ton ship seemed not above rolling and pitching in the swell, not above creating great clouds of spray as it hit the waves. Lying in the bunk, there was a longing for the sort of wind that blew down our road. 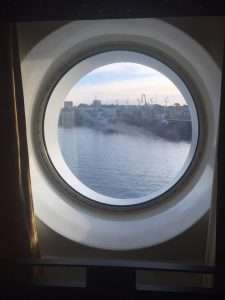