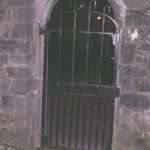 The sound of the telephone ringing breaks the silence of the evening. Someone has been spotted lingering in the cathedral porch, a place that had too often been used as a toilet facility until the practice of locking the gates of the grounds at night was introduced. The entrance gates are firmly padlocked, so someone has climbed the railings; to call the Garda barracks about something so minor seemed inappropriate.

Putting on coats and attaching a leash to the dog, we walked over to the gates. A bicycle was leant against the railings, a pale face peeked around the edge of the porch – someone was there. The padlock was opened and we walked across the drive.

Four young men were sat in the porch, they seem startled at our appearance. They claimed the side gate was open and that was how they had come into the grounds, that they had done no harm, and that they would go quietly. They left a box of tin foil lying on the stone bench on which they had been sitting, twists of foil lay on the floor, along with a ballpoint pen. The side gate had not been open, its heavy mortice lock was very firmly closed; they had scaled the railings or the wall.

A website advises that the foil is used for heating cocaine or meth, the fumes of which are inhaled through the plastic tube from the ballpoint pen.

The men were in their late teens or early twenties, they were dressed tidily, they were clean shaven with neat haircuts; the bicycle belonged to one of them.

What was this stuff about?

Why, in the midst of beauty and opportunity, would anyone wish to fry their brain?

What is this stuff all about? 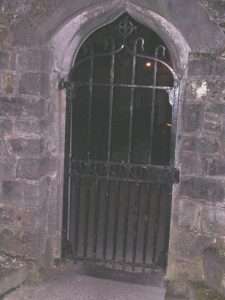