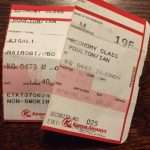 The jacket was banned in Dublin days. “You look like a farmer heading to the mart.” While this did not feel an uncomplimentary comment, it seemed a reason to bar the wearing of the checked-patterned fawn-coloured jacket with its bright yellow lining when going to the city centre. Out of favour, it disappeared from view after the move from Dublin. Only when looking for a jacket this evening did lifting a brown Donegal tweed jacket from the back of the wardrobe reveal the unmistakable vivid colour of the lining that had prompted such frowns. Without anyone to express disapproval, the jacket was brought into the light of day. It looked nothing like anything anyone would wear to a mart; it seemed eminently suitable for attending evensong in a country cathedral.

Returning to the house after Cranmer’s finest liturgy was complete, and hanging up the jacket, two slips of paper fell from an inside pocket. Stubs from boarding cards for Kenya Airways flights, Nairobi to Kigali on 24th June 2009 and Kigali to Nairobi on 3rd July – the jacket had been to Rwanda.

The summer of 2009 now seems a long time ago in a galaxy far away. There have been four return visits to Rwanda since then, but none have captured the intensity of those days. And no jacket has inspired similar comment. 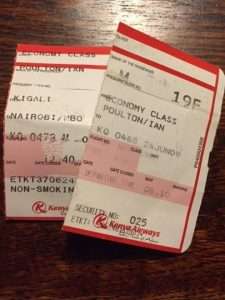