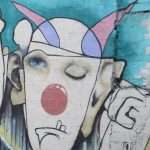 Clowns have for centuries been regarded as subversive. Shakespeare thought them so, he uses clowns to express thoughts that others might not articulate. In the script of the closing act of Shakespeare’s tragedy Hamlet, the two gravediggers are called “First Clown” and “Second Clown.” They discuss the death of Ophelia, who had thrown herself into the river, pondering if Ophelia had drowned herself in self-defence and sceptical that someone from a less powerful family would have received the rites of the church. The Second Clown declares:

Will you ha’ the truth on’t? If this had not been a gentlewoman, she should have been buried out o’ Christian burial.

Why, because he was mad: he shall recover his wits there; or, if he do not, it’s no great matter there.

The modern clown developed from the peasant character he had assumed in Shakespeare’s time, taking on the appearance with which we are now familiar during the Nineteenth Century. Clowns were allowed the freedom to mock everyone, whoever they might be, expressing an anarchic egalitarianism. Make up, wigs and absurd clothes allowed an anonymity behind which the clown could find a freedom of expression.

Shakespeare understood that one could use comic characters to say otherwise dangerous things, it is a tradition that has continued through the four centuries since. While clowns now give performances of slapstick rather than speaking with the cutting wit of the gravediggers in Hamlet, comedy can still be subversive, challenging to the powerful. The works of writers like Dario Fo can fill theatres with laughter, while asking profound questions about the nature of the society in which we live.

Associating clowns with a tradition of irreverence towards authority and power, associating clowns with the mockery of  pomposity and pretentiousness, it is disappointing to see the guise of the clown being used as a cover for intimidating vulnerable people, children and the elderly. Those of us who grew up with the Batman stories of the 1960s will know that one of the reasons that The Joker seemed so sinister was that his behaviour contradicted his appearance; clowns were to be funny and friendly, not to cause fear and hurt.

A BBC report today suggests that the clown has now become seen as such a sinister figure that even the burger chain McDonald’s are going to limit the appearances of their mascot Ronald McDonald, when a marketing icon is set aside, then the image of the clown has definitely been seen as tarnished. Shakespeare’s clowns would have found words for those responsible. 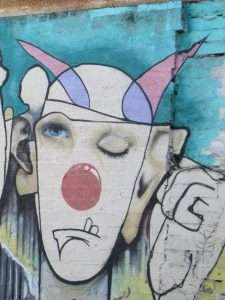