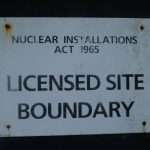 The man from UNCLE died. Robert Vaughn’s television persona is recalled as a calm and suave character who was never flustered by even the most perilous of situations and whose martial arts skills enabled him to thwart any number of opponents. Napoleon Solo and his partner, Illya Kuryakin, were defenders of a childhood world against the evil organisation THRUSH. The enemies of UNCLE threatened to take over the world, though an eight year old sat watching the television had neither any idea what world domination might mean, nor any inclination to ask. Growing up in times when memories of the Second World War were fresh in adult minds, evil and world domination would have been associated with things of which they spoke sparingly.

While UNCLE might have dispelled every danger in the world inhabited by Solo and Kuryakin, it contributed to the fears that circulated in the mind of a boy who would overhear snatches of adult conversations.

There were three primary sources of anxiety, aliens, ghosts and nuclear warfare. An eight year old now would laugh at the idea that someone was fearful about such things, but the 1960s were uncertain times.

Ghosts not only appeared on television, they were to be found in story books, and they were to encountered in tales told by family members and neighbours.

Nuclear warfare was the most frightening of all the prospects; aliens might abduct individuals, ghosts might give one a serious scare, but atomic bombs would destroy each and every one of us. The broadcast of films like the screen adaptation of Nevil Shute’s On the Beach created a mood of fear to which even adults were not immune. News programmes showed “Ban the Bomb” marches, crowds of young and not so young people with placards warned of an impending doom. An air base near our home was said to make our area a likely target for Russian missiles.  It was all the stuff of nightmares for a small boy.

The world of television series, where evil is defeated by the end of every episode, seemed a safe and secure place. Napoleon Solo and Illya Kuryakin might have been able to defeat the most dastardly plots, but were of no reassurance in the everyday world inhabited by a child in the 1960s.