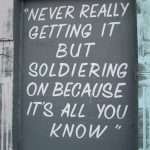 Starting a government job this week, our son had bought two good suits from a tailor in the high street, one of those places where the man in the shop has the name above the door, although the business is more than a hundred years old. He had ordered additional pairs of trousers which were to be collected. Standing in the shop, feeling very scruffy in old black shoes and shapeless trousers and pre-owned sports jacket, there was a sense of timelessness in the place, a realisation that things bought here might last decades. If one could afford to shop here, one would always look smart and, in the years the garments lasted, would probably spend less than those who had to buy cheaper clothing and had to replace it more regularly.

Those reading stuff here for a decade or more will be familiar with Captain Vimes. It is ten years since our son introduced us to Vimes. In Men at Arms: The Play, Pratchett writes,

“The reason that the rich were so rich, Vimes reasoned, was because they managed to spend less money.

Take boots, for example. He earned thirty-eight dollars a month plus allowances. A really good pair of leather boots cost fifty dollars. But an affordable pair of boots, which were sort of OK for a season or two and then leaked like hell when the cardboard gave out, cost about ten dollars. Those were the kind of boots Vimes always bought, and wore until the soles were so thin that he could tell where he was in Ankh-Morpork on a foggy night by the feel of the cobbles.

But the thing was that good boots lasted for years and years. A man who could afford fifty dollars had a pair of boots that’d still be keeping his feet dry in ten years’ time, while the poor man who could only afford cheap boots would have spent a hundred dollars on boots in the same time and would still have wet feet.

This was the Captain Samuel Vimes ‘Boots’ theory of socioeconomic unfairness.”

Terry Pratchett’s boots were a lesson in household management. Ten years ago, we were living in temporary accommodation, a six-bedroomed house built in 1876. There was no double glazing, no insulation, and, every time the wind blew, the sash windows rattled and the curtains ballooned outwards. We took to keeping shutters closed day and night in the hope of keeping out draughts.

The gas bill for two months’ heating, a couple of hours each morning and three each evening in some of the rooms, was €462, about €8 a day. Deciding it might be cheaper just to light a fire in our living room, we bought logs and peat briquettes and bags of coal on a number of occasions. A bale of briquettes cost over €4 and heated the living room, just one room, for an evening.

Putting briquettes and logs into the boot of the car one afternoon, it didn’t take long to calculate that it would be cheaper simply to turn on the central heating. Why on earth had I seen people of obviously limited means buying briquettes and logs? Presumably the answer lies in Terry Pratchett’s boot story, they hadn’t the money to afford central heating; or were afraid of running up bills they could not manage; or, if they had prepay meters, believed that they were saving money by burning lumps of carbon in their fireplace.

Socioeconomic unfairness? Indeed, it is. 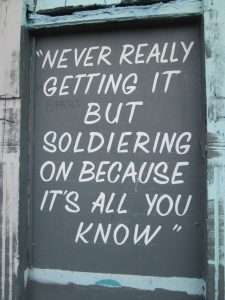