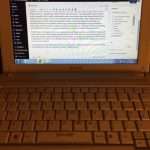 My laptop computer is something I regard with great affection. It is very compact, no bigger than a large book, but has a full QWERTY keyboard, it is, however, showing signs of age. Bought in January 2011, it has been used constantly for the past six years, going in the cabin baggage on numerous flights, brought with the luggage on every holiday; hardly a day passes when it is not used. The letter E has disappeared entirely, where it once was there is now only a scuff mark on the key. The letters T, I, H and N are not faring much better. (Why H is so worn is baffling, were I a touch typist, it would be a “home” key, but only being able to type with two fingers, there must have been a lot of words written that included H; so much for it being a four point letter in the game of Scrabble.)

Of greater concern than the keyboard, is the computer’s capacity to cope with ordinary, everyday work. Our engineer son who understands such things explained to me that even when I bought it, 1 Gb of RAM was quite limited. I took it to a computer shop where the RAM, whatever it may be, was increased from 1 Gb to 2 Gb. All worked reasonably well for a while, but the machine seems to have become slower and slower and slower. Even starting up in the morning, it can be a few minutes before any of the programmes can be utilised. All sorts of messages appear from time to time advising that this or that is not working, attempts to activate the non-functioning functions only bring further fault messages. Sometimes material disappears in an unannounced manner and can only be found by searching the recent documents menu. Of course, the advice is to by something new and efficient, but there is a reassurance in the familiar, no matter how cranky it may sometimes be.

Sitting staring into nothingness, there was a constructive train of thought regarding a presentation to be made next week, it seemed quite coherent, almost persuasive, then, for some reason, there was a break in the thought process and thoughts seemed to scatter like beads from a broken necklace. It was almost as though the brain had reached its working capacity and could not cope with further material being inputted. Maybe like an old laptop, the system just becomes slower and slower.

In some future time there will undoubtedly be neurosurgeons able to install greater RAM, or its cerebral equivalent into the human brain. The slowing brain will become a forgotten memory. 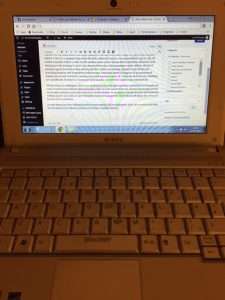