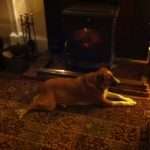 Visitors a fortnight ago brought our faithful Millie a large bone. It was gnawed with delight for much of an evening before being deposited at the foot of the basement stairs. The next morning the bone was carried into the garden and disappeared.

With our absence from the house for eight nights, Millie reluctantly gave up her place in front of the stove and went to the kennels. Arriving back today, Millie gave us a disdainful look, as if removing a dog from her accustomed place was a matter for stern rebuke. Venturing out into the garden, she returned with her white paws and nose covered in mud, the remnants of the bone held tightly between her jaws. Had she spent her time away contemplating the bone? Had she determined that on her return the first thing she would do would be to bring it back from its hiding place?

Watching her lying contentedly before the glow from the stove, the bone between her paws, an odd reminiscence came to mind; a game played in primary school in Somerset some fifty years ago.

The farmer wants a wife was one of those games played while singing. A turning circle of children singing of the farmer wanting a wife, who was chosen from the circle. Then the wife wanting a child, who was added to the duo in the middle; and the child wanting a nurse, bringing the circled number to four; and the nurse, wanting a dog, by which time the number in the middle probably matched the number in the circle. Finally, the dog wanted a bone, and a further child was chosen. The entire company then surrounded the person who was the bone and sang, “we all pat the bone,” bringing our hands down with greater or lesser force.

Information on the background of the song is sparse. It seems it dates from Germany in the early-Nineteenth Century, from whence it travelled to North America. How the song came to the little English village of High Ham and came to be sung in the primary school will probably remain forever a mystery. Perhaps it was in a book; perhaps it was included in the training of our teachers, who would have attended college in the 1930s; perhaps it just arrived by chance.

What I had really wanted to know was the significance of the poor bone which received all the patting; did the song have some long lost pagan origins?

Millie chews contentedly, offering no opinion on the subject. 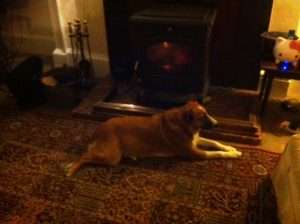