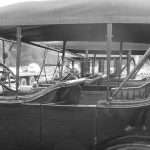 Born four months before the Armistice that brought a halt to the Great War, he is a one man archive of oral history. Memories are recalled with laughter and license.

“There were no tests – tyres were bald, if the brakes failed, people would used the reverse gear. The drivers were bad.”

“The doctor had a car, but he couldn’t drive. Mattie drove for him. Mattie was no better at driving than the doctor.”

“Mattie would go out to to do deliveries for the doctor. He would take tablets out to people up the mountain. People were poor, very poor. There might be five families living in the buildings around the yard at a farm. Mattie would know all of them and they all knew Mattie.”

“Mattie took tablets to one farm. Hello, Mattie. Hello, Mattie. He would have spoken to everyone. He would let on to know more than he did. Anyway, he took these tablets to a man who was sick and put them on the kitchen table. ‘How many should I take, Mattie?’ asked the man. Mattie thought about it, “Take two at bedtime and if you are still alive in the morning, take two more.”

“Mattie would do anything. One day, he took a load of grain to a mill for it to be dried. Six or seven tons of grain in sacks on the back of a lorry. It was tricky enough to carry such loads.”

“He arrived at the mill and there were a group of people standing looking at the mill pond. A calf was in the water. ‘How much is the calf worth?’ asked Mattie. A man said he would give Mattie £5 if he could get the calf out. Mattie took his clothes off and went into the water. Between the depth of the mud and the depth of the water he was in nearly neck-deep. He got the calf out of the water and climbed out. He was covered in mud and got men to throw buckets of water over him. Once the mud was gone, he went to the grain drier to get dried. He had thought it all through.”

Mattie seems a man who was worthy of remembrance. Restored to his clothes, it was not hard to imagine that Mattie climbed back into the cab and drove off in his unroadworthy lorry with a great sense of satisfaction. The bags of grain delivered and £5 in his pocket, it had been a good day’s work. 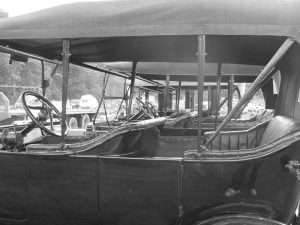