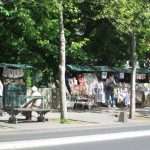 Sitting on a bench beside the Nore, the man stared out across the water, his sable German Shepherd dog stood attentively beside him. Perhaps in his fifties, he wore a cycling top, not one of the gaudy lycra variety favoured by those who cycle in groups on Sunday mornings, but something altogether more traditional and understated. Black, with red and white piping, it bore sponsor names across the back, “St Raphael – Gitane – Campagnolo.” It is more than fifty years since the St Raphael – Gitane – Campagnolo team participated the grand tours; it was the team of Jacques Anquetil, the greatest rider in the history of the Tour de France.

Anquetil was the embodiment of sophistication and suave modernity, would have been pictured in monochrome in the sports pages of 1960s newspapers, photographs of him would have been seen by a boy who was a contemporary of the man sat on the bench. Fashion photographs in the magazines would have added to the impression that France was a place of suaveness and style. Then there were the films set against Cote d’Azur scenery, with yachts and diamonds and alluring voices, shaped conclusions. France was a place other than the dull, dowdiness of 1960s England.

Why was it that France gained a place in the consciousness as meaning style and sophistication, a place so firmly established that even a boy was aware of it? Perhaps it was because after the Second World War they moved quickly to escape from the drabness of austerity, even if one of Christian Dior’s photo shoots in a Paris market prompted a violent reaction from the traders who had endured years of hardship. Perhaps it was because, in the mind of a schoolboy, France was the embodiment of the risqué. Perhaps it was just that France was foreign, and being our nearest neighbour was our first encounter with language and culture differing from our own.

Chiefly, though, the images of France that shaped boyhood and teenage thoughts were the black and white photographs. The people who looked at the lens seemed to occupy not just another country, but another planet. The street scenes showed towns and cities unmarked by wartime bombing or heavy industrial decay. Everyday life seemed to have a different quality; three men pictured sitting at a table outside a café enjoying an evening glass of Anis created an image very different from that of three men standing in a pub drinking brown ale.

Perhaps it’s all a matter of presentation, France, being more image conscious, seeks to portray itself in a particular light. Perhaps the differences between it and other countries are not so great; perhaps it is all a matter of appearance rather than one of substance, but whatever it is, you can’t help notice it.

On the evening the British government turns its back on Europe, the contrasts of the 1960s seem likely to return. An Irishman wearing an Anquetil top on a riverbank in a country town seems a statement of his preference for the suave. 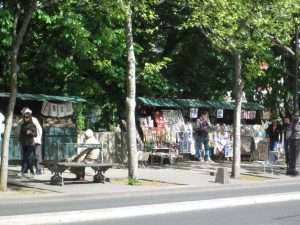