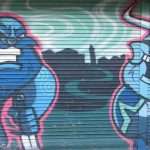 Being a sickly child, there were many days spent lying in bed, or under a blanket on the settee. There were many hours spent watching the room around, the furniture, the window, the ceiling, the wallpaper. In younger years, being unable to read meant the examination of the interior of the room was all there was to do. After learning to read, there were still times when the illness was such that even holding a book was too much effort.

The shapes of the furniture, the light through the window, the patterns on the wallpaper, these became the focal points. The wallpaper might reveal faces and animals and beasts. In feverish times, the images on the walls might become animated, at night the beasts might become frightening. Not once did the thought occur that other people might similarly look at the patterns and see things that were not there.

Listening to Hancock’s Half Hour on BBC Radio 4 Extra, there was an episode from 1958, “Sunday Afternoon at Home.” Tony Hancock is bored and sits staring at the wall, he begins a conversation with Bill Kerr:

Have you noticed if you look at that wallpaper long enough, you can see faces in it?

Yes, yes you can, you can see faces after a time, it’s the pattern, it makes little faces. There’s a lovely one of an old man with a pipe.

There it is, look. It’s there, plain as eggs. Look along my finger. See? See? There’s his nose, there’s his pipe, and there’s his hat. See it?

Of course you can see it, there’s dozens of them all over the room. Look, there’s Churchill over there, and Charlie Chaplin over the mantlepiece. Concentrate! Squint, man, squint. Don’t shut ’em. Can’t you see them?

Oh, go and sit down. You wait until you want me to see anything.

If a child in the 1960s had realised that even grown ups might see faces and animals on the wall, perhaps those times of illness might have been easier. 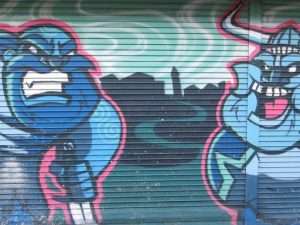