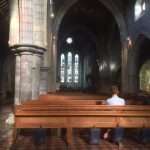 Anglican Evensong on Mothering Sunday, the brilliant rays of the afternoon sun coming through the great west window of the cathedral. Evensong demands no participation, nothing jars, nothing annoys, no demands are made. It is a moment just to be present.

The service includes a sequence of choral settings of passages of Scripture, there is a psalm and two passages from chapter two of the Gospel according to Saint Luke. The Gospel passages are in Sixteenth Century English and derive their names from the Latin versions of their opening words. The Magnificat, “My soul doth magnify the Lord”, is the Song of the Blessed Virgin Mary; the Nunc Dimiitis, “Lord, now lettest thou thy servant depart in peace”, is the Song of Simeon, the old priest in the Temple to whom Mary and Joseph take the infant Jesus.

The radicalism of Saint Luke’s writing is lost in the prose and the music. “He has put down the mighty from their seat and exalted the humble and meek”, sings Mary. An unmarried, pregnant teenager, Mary would have known what it meant to be humble and meek. Look at the medieval paintings and the plaster statues of Mary now, the submissive, pale white Caucasian woman depicted seems a far remove from the young Palestinian who proclaimed a social revolution.

Of course, Mary’s words were not fulfilled, the mighty were not put down, and the gap between them and the humble and meek has grown ever wider. Perhaps the mistake was the confidence placed in human nature, the naive belief that, given enough money, people would become altruistic; there would be a generosity that had not been anticipated; that the bonds of humanity would be so strong that the thought of hundreds of millions living in destitution would be unacceptable.

Perhaps the failing was the confidence placed in democracy. Democracy was seen as Christian, it posited the constitutional equality of every person, consonant with the idea of equality before God. But for democracy to work, for democracy to fulfil the aspirations of the Blessed Virgin Mary, it depended on the humble and meek having the power to effect change. Advocates of democracy as the avenue to justice saw society as pyramid-shaped; if the bulk of the people were at the foot of the pyramid, then they could exercise their democratic rights and bring reform. But society is not pyramid shaped, it is diamond-shaped; the bulk of the people are in the middle. The middle will not act against their own interest, they will not act to empower and enrich those in the lower socio-economic groups, particularly when the democratic strength of the middle is combined with the economic power of those in the elite groups. Christians are part of the middle, they do not question a system that leaves some with nothing.

The music was pleasant, the Elizabethan prose was reassuring. Mary’s song was sung and no-one was put down from their seat. 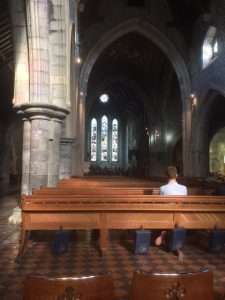