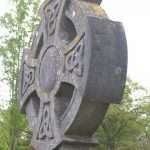 “He calls his own sheep by name and leads them out. When he has brought out all his own, he goes ahead of them, and the sheep follow him because they know his voice. ” John 10:3-4

Live in a small rural community and you realize that the idea that you can be anonymous is naive; even if you speak to no-one, everyone knows who you are. Because everyone knows everyone else, is was no point in being anything but straight; if you try to deceive people, try to be something you are not, and they catch on to you very quickly.

Living in a small rural community is not always the best preparation for the outside world. when you are accustomed to honesty, to accepting people as you find them, it is easy to be taken in by those whose upbringing has been different. Country values of being open and honest sometimes don’t count for much in the city; sometimes there are hard lessons to learn about people not trusting people.

Read the Gospels, and Jesus of Nazareth, the man from Galilee, the man with the country accent, the man from small town, has no such problems. Jesus is not a man who is deceived. He is instantly able to spot the those who are dishonest , those who are conmen. He knows also when people are being honest and sincere, “He calls his own sheep by name . . . and the sheep follow him because they know his voice”, Saint John tells us.

Look at Jesus’ encounters with people:

In Saint John Chapter 4 Verse 16-18, there was the woman at the well who tries to avoid the awkward subject, Jesus says to her, “Go, call your husband and come back.”

“I have no husband,” she replied.

Jesus said to her, “You are right when you say you have no husband. The fact is, you have had five husbands, and the man you now have is not your husband. What you have just said is quite true.”

In Saint Matthew Chapter 19 Verses 16-22, there was the rich young man who wants eternal life and says he has obeyed all the commandments, but Jesus knows that in his heart of hearts the man still has not really committed himself. Jesus says to him, “If you want to be perfect, go, sell your possessions and give to the poor, and you will have treasure in heaven. Then come, follow me.”

When the young man heard this, he went away sad, because he had great wealth”.

Even Jesus’ closest friend do not escape minute scrutiny, as we discover in Saint John Chapter 21 Verses 15-19. Peter has denied Jesus and when Jesus has risen from the dead, he questions Peter closely, asking the same question three times, The third time he said to him, “Simon son of John, do you love me?”

Peter was hurt because Jesus asked him the third time, “Do you love me?” He said, “Lord, you know all things; you know that I love you.”

The Good Shepherd knows his sheep. The Bible tells us that while we look at people from the outside, God looks at the heart. God knows even more about people than do the inhabitants of a small rural community. He knows the thoughts as well as the actions.

Of course, we pretend to ourselves that the picture of the Good Shepherd is no more than a nice story and that God is not one who sees his flock all of the time.

Attending church, saying our prayers, our memory becomes selective. We remember the aspects of our life that cast us in a good light. We imagine God as some benign old gentleman who smiles sweetly at all we say; we prefer not to think of God as someone aware of all the things we would prefer not to mention.

Living in a country parish in Northern Ireland for seven years, the field at the back of our house was used for grazing sheep. The field was bounded by a wire fence that was placed closely against a stone wall. Frequently, the sheep would push their way through the wire and find themselves jammed between the barbed wire strands of the fence and the granite stones of the wall. Trying to free them was difficult. To pull a sheep back through the wire was to risk injury to oneself and to the sheep, and was resisted violently by the animal. The only other option was to stand on the wall and pull the sheep upwards and lift it back over the fence. It was a precarious exercise; but it had to be done, the sheep could not be left trapped.

Lifting those sheep out of a jam became for me a picture of what God does for us; reaching down to lift us up from situations from which we cannot extricate ourselves. The Good Shepherd is good because he is prepared not only to reach down, but to sacrifice himself for his flock, to become the gate through which they are saved.

“He calls his own sheep by name and leads them out”, says Jesus in Saint John Chapter 10 Verse 3. He knows exactly what we are like; even when we pretend to ourselves that he does not. He knows the situations in which we have become trapped.

“He calls his own sheep by name and leads them out ”. We can no more escape his watch than we can remain anonymous in a small rural community. 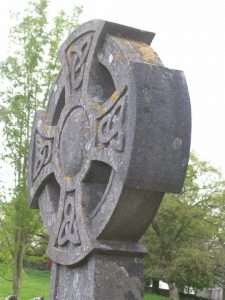