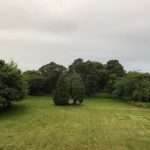 It being the longest day seems unlikely; a deep, dark cloud hangs across the sky and brings a premature darkness. A clamminess fills the air, a stickiness, a stifling warmth.

“Heavy weather.” Wasn’t it the title of a P.G. Wodehouse book featuring Lord Emsworth and the Marquess of Blandings? The earl’s stately home is filled with an array of irascible, conspiratorial characters. The oppressive heat of an English August saps the energy of those gathered, becomes the mood of the story that unfolds. Imagining the discomfort entailed in dressing for dinner on such evenings, one almost wishes for the first flash of lightning that announces a storm and a clearing of the air.

Heavy weather marks a change. The legendary heatwave of 1976 came to a sudden and abrupt end with the accumulation of bank upon bank of grey cloud and a cloudburst of rain that deluged the south of England. The Earl of Emsworth would have been relieved that the weight of the humidity had passed.

Heavy weather can be welcomed, attractive. One afternoon in September 2001, sitting in Talaptap, a small village on the Philippine island of Negros, the weather was heavier than anything experienced in Ireland. Tropical heaviness is a deadweight burden, particular for those for whom a temperature of twenty degrees represented a fine summer day. The conversation with Filipino companions was desultory. The projects of which they spoke were interesting, the work they were undertaking was transformative, but there was a complete absence of energy to quiz them about achievements and aspirations. At about five o’clock, about an hour before sunset, there was a resounding crack of thunder and rain began to fall with the intensity of a bathroom shower. A knot of small boys, barefoot and dressed only in shorts, ran out onto a concrete basketball court that lay at the centre of the village. There were shouts and laughter and they danced with delight in the warm water that poured from the sky. The temperature immediately fell, it was still warmer than any Irish summer’s day, but it became fresher and more bearable.

Heavy weather can be unwelcome. A rainy season day in Rwanda brought a thunderstorm and downpour to compare with anything elsewhere in equatorial lands, it seemed welcome rainfall. John Wesley, our African companion stood on the verandah looking glumly at the sky. “Isn’t this good, John Wesley?”

He shook his head. “No, this is not good rain, this causes floods and washes the topsoil from the land. This is not the rain we need. What we need is Irish rain, soft and damp that gently makes everything wet.” Watching the spectacular bursts of lightning across the sky, it was hard to think that the weather had nothing to commend it.

Whether attractive or unattractive, it seems heavy weather can be unhealthy. This evening, the Head of Forecasting with Met Éireann said, “it is forty years since Ireland has experienced a heatwave during June like we have just experienced.
Gerard Fleming warned that, “because of very warm nighttime temperatures, people with respiratory difficulties should not take unnecessary exercise of a “vigorous kind” but rather stay where it is cool and allow their bodies to cool down.”

Lord Emsworth and the Marquess of Blandings, his prize pig, would have welcomed such an opportunity to cool down. 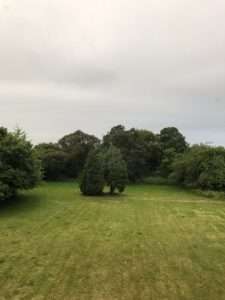