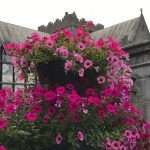 Instagram seemed a refuge from the big brother-like behaviour of Facebook, an escape from the targeted advertisements and suggested groups, a remove from being part of the product that Facebook sells to advertisers. Instagram is merely a platform for sharing one’s photographs and enjoying those of others. Instagram comes with the option of applying a range of filters to one’s images before adjusting them further with a string of effects. Even a most pedestrian of photographers can post pictures filled with vivid colours and sharp features.

While Instagram comes without the predatorial features of Facebook, it does expose one’s pictures to odd people. Taking a photograph of pink flowers at the top of Coach Road in Kilkenny, with the limestone bulk of Saint Canice’s Cathedral behind, it was posted on Instagram with the hashtags #saintcanicescathedral, #kilkenny, #medievalmile and #summer2017, hashtags that merely identified the photograph for anyone who might be looking for local pictures. It was odd to find that someone had from Kazakhstan almost immediately “liked” the picture, perhaps they were holidaying in the Marble City.

“Likes” on Instagram seem like comment spam that appear on many blogs and forums, they are not a comment or a contribution, but are merely an attempt to draw readers to their own page. The Kazakh “like” came from someone presenting himself as a plastic surgeon, his photographs were of women who had undergone surgery to adjust various of their physical features. His Instagram page showed he had 48,000 followers; 47,937 followers more than my page. Presumably, the person operating the plastic surgeon’s account has a computer programme that picks up various words and then clicks on “like,” it’s hardly the case that he sits through the night in that remote republic looking out for pictures on which to click. But what was it that the computer had picked up? The hashtags were hardly the stuff that might grab the attention of potential customers for plastic surgery.

Staring at the screen of the phone, it seemed a mystery. Then the thought occurred that it was probably not any of the hashtags that had caught the robot, it was the caption, “pretty in pink.” The words had seemed apt, the medieval building amidst an abundance of flowers, but the writers of the programme that controls the robot obviously thought such words might be the sort of words used by likely clients.

The world has become a very odd place. The only consolation is that Instagram is a much safer place than Facebook where the words “pretty in pink” might have brought advertisements for who knows what. 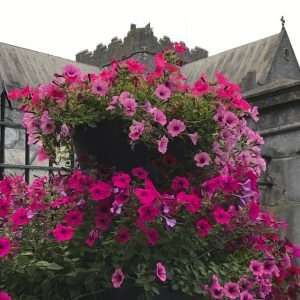