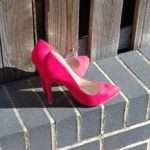 There is something about the colour pink that sets it apart. Perhaps it derives its fascination from associations with femininity, but why did those associations form in the first place? Why do Stade Francais rugby club play in pink, in defiance of the conventions of masculinity that surround rugby? Why do little girls like pink dresses? Why does an abundance of pink flowers have an attractiveness that one might not feel were they, say, all blue or all yellow? Is it something about pink arising from a mixture of white and red and the associations they have?

In younger days, before the hard-headedness and cynicism of adulthood stamped on the capacity for imagination, a pair of pink shoes left at the wayside might have been the inspiration for an entire story. Plots might have been woven around the appearance of the shoes in such a place, and being the stories devised by a small boy, there would have been no place for Cinderella or any fairy-godmother. Instead, they would have been tales involving manly heroes, men who faced unarmed those who had abducted the wearer of the pink shoes. The wearer of the shoes would have been feisty and would stand alongside the hero and repel the thugs sent to re-capture her, and they would flee hand in hand as dramatic music played in the background.

Of course, the realism of the adult world would almost certainly provide a much more accurate and much more dull explanation of how the pink shoes appeared where they did. Perhaps they had fallen from someone’s backpack, landing on the pavement, unnoticed by their owner, who was wearing headphones, and someone had found them and had picked them up and had placed them neatly on the wall. Perhaps their owner had found them difficult shoes into which to walk home and had removed them so as to put on flat shoes from her handbag and had walked away without the pink shoes. Perhaps there had been a return journey in a taxi and the wearer had taken her coat and handbag from the car and had set down the shoes in order to pay the cab driver and had gone to her front door, forgetting that the shoes were still on the pavement. Perhaps there are many possible explanations.

Sometimes, just sometimes, though, life would seem more comprehensible if there were magic, if extraordinary and unexpected things were possible. 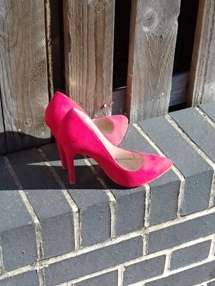