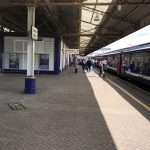 Newton Abbot on a Sunday morning, a tidy, trading town. Streets lined with independent shops offering every good and service one might imagine. Pulling into a town centre car park, it was the railway station that had a magnetic power. Newton Abbot station had been a place for coming and going in teenage years. The school minibus would drop a clutch of homeward bound boys, each with a warrant for a second-class half-fare single ticket. The single ticket to Taunton was sixty-five pence.

There was a pattern, but no apparent logic, in the stations used by the school. Exeter Saint David’s at the start of the term, Teignmouth at the end of term and Newton Abbot for boys returning home for the two weekends permitted each term. Exeter acquired an association with gloom; Teignmouth, an association with a buoyant delight.

Standing on the platform more than forty years after those British Rail journeys, there was an inclination to board a south bound train, for one stop. Teignmouth is the next station on the line. It was the location of our sister school. While, for the good of our health, boys travelled deep into Dartmoor to a sprawling grey building where condensation would freeze on the inside of the windows on winter nights and where the nearest shop was three miles distant, girls enjoyed a relatively liberal regime in a fine house above the seaside town. Fraternisation was permitted occasionally, teenage romances blossomed briefly. Teignmouth meant girls in the height of 1970s fashion and pop records and smiles and laughter. Teignmouth represented a world entirely other than the one inhabited by underweight, undersize asthmatic schoolboys.

Not learning to drive until living in Northern Ireland, in student days, Teignmouth was a place to reach by train. Not so much to be there, but to make the journey down the Exe estuary and along the South Devon Coast. Starcross and Dawlish Warren will ever be evocative of light on water and the warmth of long days. In stormy times, the railway might be inundated, but in those years the sun seemed never to be absent. Once, a friend and I journeyed down for no reason other than the journey; we ate lunch in a pub in Dawlish and played frisbee on the beach before returning to the mundane meadows of Somerset. Returning from the station at Taunton had meant hitching a lift with a kindly motorist, the car radio carried commentary on a five set match between Borg and McEnroe at Wimbledon.

The Teignmouth-bound train pulled out and the reverie passed. 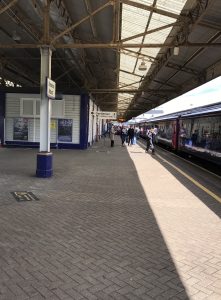