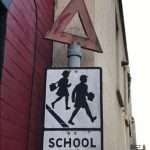 Even in schooldays, it was an annoying sign. The primary school teacher had drilled into us, “look right, look left, look right again, if it is all clear, go straight across,” a piece of advice that was to be superseded by the less succinct, but more useful, “Green Cross Code.” Anyone who had attended High Ham Church of England Voluntary Controlled Primary School would know that the sign was wrong; no-one we knew would step out to cross the road without proper caution and the sign showed children who seemed oblivious to the fact that a Vauxhall Victor might be approaching at speed.

It wasn’t just the behaviour of the children that was an annoyance, it was the way they dressed; they wore the school uniform we would have associated with the expensive private schools that were very different from our own school. There was no uniform in our school, and if there were it is difficult to imagine some of the boys would have been prepared to wear a cap and short trousers. The girl wears a hat and a blazer and skirt and carries a satchel; no-one need have carried a satchel to our primary school, there was no homework other than spellings that were written on a slip of paper on a Monday afternoon and shoved into a pocket so that they might be learned for the weekly spelling test on a Friday morning.

In later years, a deeper critique of the sign might have developed, not only about its assumptions regarding social class, but in the presentation of the boy as calm and collected and striding deliberately to the school, while the girl has no such composure and rushes across the road with her schoolbag swinging wildly behind her.

Oddly, the signpost remains in Glastonbury, that most avant-garde of places. An Internet search to attempt to discern its age revealed that it was from the early post-war years and that was made from cast aluminium, not cast iron. The signpost seems worthy of comment, for it is featured on the Wikipedia entry on “Road signs of the United Kingdom.” Did the author of the Wikipedia entry also find the signpost incongruous with its location, or is that to over-analyse?

Perhaps the signpost serves as a reminder of the world from which Glastonbury was an escape, or perhaps it is a counter-cultural statement in a town that has defied tradition and convention for fifty years, both of which thoughts are reading far too much into a warning that there is a school ahead. 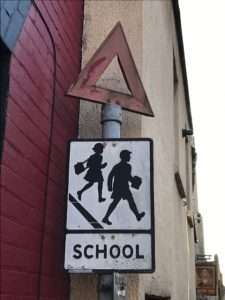