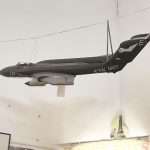 The ladies at the counter would have found some other word for it, some word other than “synchronicity.” Not having seen so much as an Airfix model of the aircraft previously, to have encountered a large scale model, suspended in the air above a shop was unexpected. It was even more unexpected to discover that it bore the number of the squadron with which my father worked. A de Havilland Sea Vixen bearing the markings of 890 Squadron of the Royal Naval Air Service which had been based at HMS Heron, the Royal Naval Air Station at Yeovilton in Somerset.

The Sea Vixens had caused deep fear during childhood years, a fear recalled here only days ago; to see a model of one unexpectedly seemed a scratching at a sore, a stinging of a rawness.

The psychologist Carl Jung described synchrocity as “meaningful coincidences,” it is about events that have no causal relationship yet which seem to be meaningfully related. So seeing aircraft flying from RNAS Yeovilton and days later seeing a model of an aircraft that would have caused fear when it flew from the station have no causal relationship, yet the coincidence seems meaningful.

Perhaps the synchronicity is about a need to confront fears. The Sea Vixen would have inspired fear in any young boy: 145 of the aircraft were built, 55 of them were lost in accident, 30 of those accidents were fatal, 21 of the accidents involved the loss of both the pilot and the observer. More than fifty men died flying in an aircraft that took no part in any war.

That stories of the Sea Vixen frightened a boy in the 1960s is readily understandable, any child whose father worked on aircraft that might unexpectedly come crashing from the sky would have reasonable grounds for fear, but why should there be a moment of synchronicity five decades later? Why should there seem a meaningful coincidence in seeing night flights from Yeovilton one evening and, days later, seeing a rare model of a rare aircraft once based at the station? A coincidence deepened by the fact that my father worked on the maintenance of the radio and radar of the original aircraft that bore the number XP924.

It was disappointing that the model was not for sale, it would have been good to have been able to take it home to Dad. 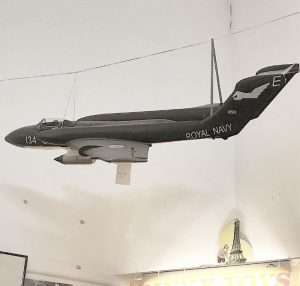