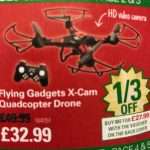 Back in the 1960s, the News of the World would be delivered every Sunday. There was not much to interest a primary schoolboy, there were the football results in the winter and the cricket scores in the winter, but little in the news that would capture the imagination, behaviour in the adult world seemed very boring. After the sports scores, the most fascinating columns would be the advertisements, there would always be offers for things for which extraordinary claims might be made. Even to the eye of a schoolboy, some of the claims sounded suspicious, and the prices of devices that promised amazement seemed very low. Perhaps it was the novelty that attracted, perhaps it was a fascination with gadgetry.

Growing up in times when our school teacher taught with enthusiasm the stories of British inventions in the Eighteenth and Nineteenth Centuries, there was a confidence that there would always be new and exciting things, that while we sat at our desks reading the words on the blackboard, there were white-coated men in laboratories and workshops refining the latest pieces of technology. Gadgetry seemed part of the spirit of the times, as television sets became polychrome and radios were transistorised and refrigerators and electric cookers became evermore commonplace, there was a sense that people enjoyed things that seemed modern and technical.

It is oddly encouraging to see that the engagement with gadgetry persists. An advertising catalogue fell from among the pages of the Western Gazette, the local weekly newspaper. Among the diverse products,ranging from Christmas trees to screwdrivers, that were being offered for sale, is a “Flying Gadgets X-Cam Quadcopter Drone” labelled as being equipped with an “HD video camera.” The price for such a piece of technology would be hard to beat, 1/3 off announces the advertisement, instead of being £49.99 it is available at just £32.99, and if a purchaser uses the voucher printed on the back page of the catalogue, then there is a further £5 reduction, bringing the cost down to £27.99.

Even in schooldays there would have been a certain scepticism about such offers. Schoolboys now would Google the cost of HD video cameras and find figures that were multiples of the total price of the drone and the camera; they would check the cost of drones and find prices far in excess of £27.99, but what matter? It is a gadget that offers fascination; it might not last very long, it might not perform as anticipated, but gadgetry is more about novelty than function. It is about knowing one can do things,without necessarily having any wish to do them. 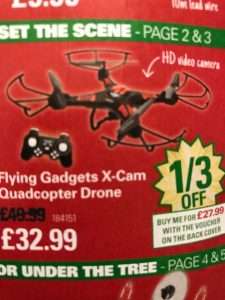