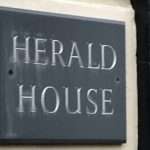 In the past year, more than a third of the readership has disappeared from here: on 29th January 2017, the monthly readership was 2,188, on 29th January this year, the figure for the month had fallen to 1,398 (in the same time, the Alexa global ranking for the site has fallen from the mid-400,000s to below 800,000). The decline is of no consequence, were the figure just 98, it would continue; it is a piece of occupational therapy, sometimes even a cathartic process. It is of the nature of online publishing that, unless it is paywalled, it is insubstantial; so-called “social influencers,” those with a hundred thousand followers or more, appear and disappear, at the mention of payment, their readership dwindles. Digital publishing, online writing, has not the credibility of plain old-fashioned words on paper for which one paid.

Walking through Langport, two house signs one saying “Herald House” and one saying “Press House” are the last visible reminder that even the smallest of towns once sustained a a newspaper. An Internet search, (for where else does one turn for a first port of call?) reveals:

The Langport Herald, owned by G.H. Hemmell, was first published on Saturday, 7th July 1855 and it continued to be printed in Langport until its final issue on 1st May 1937.

The Langport Herald ceased publication on the day my mother was born, but were it still in print, it would command a respect not accorded to a free website.

Perhaps the respect arises from a subjective personal perspective; paying for a newspaper is an indication one takes it seriously, otherwise one would not buy it. Most websites require no such seriousness a person might drift through the dozens of online publications, it may cost nothing and may mean nothing.

Were the Langport Herald still in print, it would also command respect for objective reasons. It was hard copy; the old fashioned process of printing it each week at Herald Press House and its distribution in the town and neighbouring villages, was a form of quality control. Printing ensured a reasonable veracity, it allowed for accountability; an untrue statement about someone might result in the copy finding its way into the hands of a solicitor, an edition containing an untrue story might lie for weeks in the homes of readers, a continuing indictment of the editor. Paper pages are not like online pages which can be changed in seconds and which may assert untruths that may instantly be deleted if the publisher fears the interest of a lawyer and where readers may search in vain for things they know they have read

Online publishing has far lower quality controls, it has a far lower bar of truthfulnness, and is far less amenable to being held to account. Being unaccountable, accordingly, online publishing commands less confidence. A single proper newspaper is of more lasting significance than a cackle of social influencers. 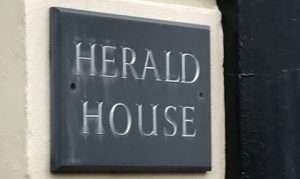