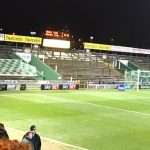 Last night’s attendance was announced over the ground’s public address system, 2,330 including 120 supporters of Grimsby Town. It was barely more than a quarter of the crowd of 9,196 that attended last Friday’s FA Cup fourth round clash with Manchester United; there had been 2,176 away supporters at that match, so around 5,000 more Yeovil Town fans. Being honest, the FA Cup tie was a first visit to Huish Park in fifteen years; going to the fixture against Grimsby four days later was an opportunity to experience real football, football away from the gross greed and commercialism that characterize the top clubs – it is said that Alexis Sanchez of Manchester United earns more in a month than the Yeovil Town budget for the year.

The most notable things about the match seemed to be that Grimsby Town had two players sent off, the second dismissal making the remainder of the game very one-sided; that Yeovil scored three goals without conceding one, an uncommon result for them this season; and that there was a bizarre pitch invasion by four people, who ran the length of the pitch before reaching the empty away terrace and were surrounded by stewards as they attempted to escape from the ground.

Why would anyone attend a midweek game between two teams in the lower half of League 2? (Before English football engaged in the soccer equivalent of grade inflation, this was Division 4, a much more meaningful description of the level). Why go? Because this is real football.

Watching a man returning from the half-time break with a cardboard cup of Bovril, there was a sense of tangibility. There was a sense that this was not the ersatz game played on television screens and watched by fans in replica shirts standing in pubs, but was something authentic, something that filled every sense. Local West Country accents called encouragement as the teams returned to the pitch and one knew it could only be Yeovil.

The next midweek fixture is against Fleetwood Town in the quarter-final of the Checkatrade Trophy: real connoisseurs’ football. 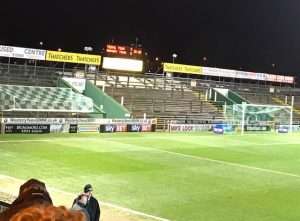