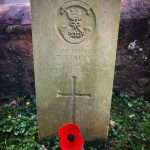 One can stand on a hilltop at the Somme and see cemeteries stretching in a dotted line as far as one can see. One can drive through the flatlands of Flanders and encounter cemeteries in unexpected places. One can visit the memorials at Thiepval and the Menin Gate and Tyne Cot and countless other places and count tens and tens of thousands of names. One can visit Notre Dame de Lorette and scan the names of the 579,606 men of all sides who died in the region of Nord-Pas-de-Calais between 1914 and 1918. One can contemplate five and six and seven figure numbers, and then a single grave can come with a jolt.

The church of Saint Andrew in the Somerset town of Wiveliscombe is built in the red stone of the surrounding countryside, a deep red that contrasts sharply with the new green spring growth of the churchyard. A sign at the gate placed by the War Graves Commission says that the cemetery contains Commonwealth War Graves. The CWGC headstones are readily identifiable, one stands against the graveyard wall near the west door of the church, over looked by the imposing tower. The inscription is sparse:

The Commonwealth War Graves Commission website says that Thomas Besley served in the 3rd/5th Battalion of the Somerset Light Infantry and that he was son of Steve and Fanny Besley, of Holelake, Wellington and was born at Wiveliscombe. No details are given of the circumstances of his death.

Thomas Besley’s headstone has the standard inscription provided by the Commission, any additional lettering would have been at the expense of his family; perhaps they were content with the form of wits provided, perhaps they felt that being expected to pay for lettering only added to the pain.

There is a painful incongruity in the intrusion of the reality of the Great War into the tranquility of a country churchyard. There is an added poignancy in the grave of this one private soldier, Thomas Besley was seventeen years old. Thomas Besley should not have been in the army, the minimum age for military service was eighteen. He must have falsified his age in order to enlist, no doubt in the company of others who similarly misrepresented their ages. Had he waited for conscription, waited to be called up, his papers would not have arrived until he was eighteen and he may have lived to a ripe old age.

The grave of Thomas Besley is the grave of a boy who did not need to die. Perhaps it pulls one up because it personalised the appalling waste of humanity that was the so-called Great War for Civilisation. 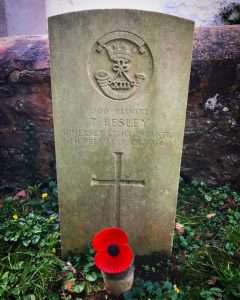