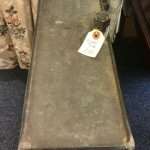 The Market Cross Antiques Centre in Somerton is a veritable treasure trove of things beautiful, things interesting and things quirky; an Aladdin’s den in which it is possible to pass time without noticing the clock has crept around and there are other things that need to be done.

Strange and unlikely things sometimes appear for sale, among the unlikely things is an antique domestic water tank at £33. Its presence in the shop prompted laughter and thoughts of Denzil Penberthy.

Denzil Penberthy is a character in tales told by the Cornish comedian Jethro, one of which concerns the BBC proagramme the Antiques Roadshow:

Denzil Penberthy would have been pleased at the presence of the water tank in the shop. He might have turned to Jethro and said, “I told ‘e so. I told ‘e I was right to take tha’ water tank to Truro. I told ‘e tha’ it was an antique.” 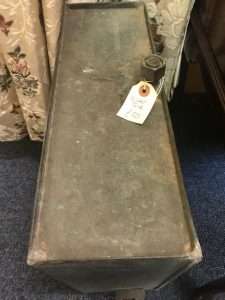