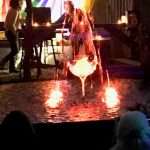 A dancing musical fountain did not seem the most likely enterprise with which to attract a crowd on a Friday night, nevertheless fifty or sixty people gathered in the garden at the rear of the King’s Head. Soft electronic music came from speakers while a fountain of water, illuminated by lights that changed in colour, rose and fell and span round, creating patterns in the night air,

What word might have described the experience? Different? Unusual? Quirky? Wishing to encourage the young landlord in his efforts to revive the establishment, there had been no feeling of begrudging the £5 cover charge, but it seemed an experience more odd than captivating. Perhaps the dancing musical fountain stands in a tradition of entertainment much older than the pop bands and comedians who more often comprise the entertainment in local venues.

Travelling entertainers were a common occurrence in times before radio and television, their repertoire varied as widely as the places in which they performed. Few performances could have been odder than those of Roland the Farter, a court jester who so pleased King Henry II with performances of flatulence that he was given a manor in Suffolk and thirty acres of land in recognition of his services.

Flatulence presumably became unfashionable. Travelling showmen became more versatile. Jugglers and acrobats, fire eaters and magicians, tightrope walkers and strongmen became popular. Circuses and fairs offered to small communities entertainments that differed from the music and the songs that were sung in the local public house. Troupes of actors seem sometimes to have been the radical commentators of their time. Read William Shakespeare’s Hamlet and the Bard has no difficulty in casting the travelling players who come to Elsinore as people who will co-operate with Hamlet in his subversive intent. In times when political opposition to the Crown was impossible, stage satire was an opportunity for the expression of dissent. By the Nineteenth Century, reading through the bills for the music halls and the travelling shows suggests a night out was one that would have been filled with variety.

Perhaps it is the current entertainment fare of music and comedy that is atypical. Perhaps a diet of radio and television virtually satisfied people’s desire for diversion and pop music and stand up comics were all that could endure in the face of electronic competition. But perhaps now there is a wish to recover the diversity of the past, to encounter the strange and unusual because the programmes on the television screen have grown tired and dull. Perhaps a dancing musical fountain is a foretaste of things to come. 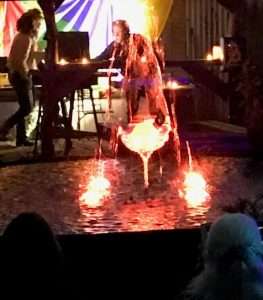