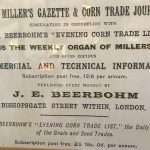 The building had mementos of its former existence, a corn mill powered by water that rushed through a mill race and then spilled over a weir in the adjacent river. Among the pictures on the wall there was an advertising bill for the millers’ newspaper.

Beerbohm’s Evening Corn Trade List was published in the 1880s, at the height of the Victorian age and the expansion of the empire. Trade was both a cause and an effect of the desire to colour the map of the world pink and, judging by the cost of Beerbohm’s publication, the corn trade was a very lucrative business. £5 15s per annum was 135/- a year, 2/6 a week. For a working man a half a crown would have represented a significant proportion of his weekly income. When the first old age pensions were introduced twenty years later, a single person received only 5/- per week, the Evening Corn Trade List was an expensive publication.

Trade drove innovation and communication. Each evening, the list would have been printed and posted, presumably the overnight mail trains would have ensured that it arrived the next morning in the offices of millers around the country. To be without it would have left one unaware of the daily shifts in prices that are a feature of any commodity market.

The wish for immediate, up to date information on trade was not new. Whilst Galileo is credited with the invention of the telescope, his work was a refinement of the efforts not of scientists, but of Dutch merchants who wanted to be able to see which ships were approaching a port so as to know which commodities might be arriving from distant lands. The unanticipated arrival of a large supply of a commodity might leave traders with unsold stock, if they knew what was coming, they could adjust prices and clear stock before the new supply arrived.

The Evening Corn Trade List may not have been exciting, but its information would have made the difference between profit and loss for its recipients. Watching commodity markets around the world via the Internet is an activity that could not possibly have been imagined by the staff at J.E. Beerbohm, having that information free would have been even more unimaginable. 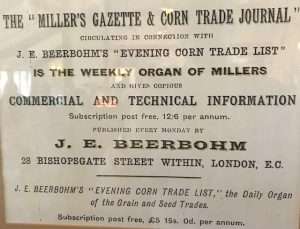