There seems to be an atavistic streak within some of the people of Northern Ireland that drives them to destroy their own communities. Bonfires that deface neighbourhoods, petrol bombs, rioting, the hi-jacking and burning of vehicles; the capacity for self-harm has never gone away.

News of the violence surrounding the 12th July commemorations hardly merited more than a footnote to the coverage of the World Cup, Brexit and Trump. Tales of violence in Northern Ireland would be shrugged off by English viewers as a reversion to type.

In a housing estate where I would have once walked the paths and knocked at the doors of those claiming an Anglican connection, a bus and its passengers were hijacked. Everyone was driven off the bus before it was set alight. The protest was precipitated by the dismantling of two massive bonfires in Belfast that threatened the homes of the intimidated people who lived in the proximity of massive stacks of pallets with their sectarian slogans.

The housing estate was never an easy place.  In the 1980s, the paramilitary ceasefires were still years away; there were still plenty of atrocities to come. The extremists fed off the polarisation of the two communities and the middle ground was narrow and precarious.  There were moments when the hatred was visceral, and when just about anywhere else on Earth would have seemed attractive more attractive than the grey windswept estate.

Above the estate, a ridge of hills rose steeply to the west and north of the town.  Driving one particular road brought you to open ground where you could stand and see for miles.  The green hills and the dark waters of the lough were the dominant features of the landscape, the town shrank to manageable proportions.  Standing looking down on the streets of the estate below, a sense of proportion returned.  Those who caused so much upset were tiny people in a tiny town; the world outside was different.  The world had little interest in their strident opinions and aggressive ways and cared even less for their politics.  The favourite memory of those years remains that hilltop vantage point, where the anger and the abuse of the religious and political hardliners could, for a moment, be kept at arm’s length.

Perhaps the response to that estate should not have been to sit on a hill looking down, but to try to identify with the pain that made the people the way they were. If such a response was the right one, it was beyond me. To destroy your own neighbourhood and to terrify your own neighbours in pursuit of an unarticulated cause is probably behaviour beyond the comprehension of most people. 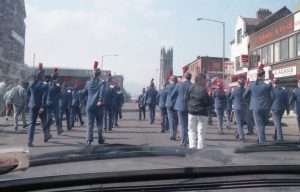