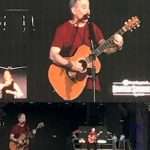 A diminutive figure in a red tee-shirt and black trousers, he stood alone in a pool of light. Sixty thousand people watched each move, listened to each guitar chord, pondered each word sung. This would be the last opportunity. Paul Simon was making his last and final concert appearance in England and closing not with a crescendo of sound and light, but with a poetic diminuendo. The Sound of Silence, written more than fifty years ago, was his final word.

“Hello darkness, my old friend, I’ve come to talk with you again,” wrote Paul Simon. Coming from a Jewish community in New York, going to synagogue each Sabbath, he would have known the words of the Scriptures recited in the weekly prayers of the community. Psalm 88 from the Jewish Scriptures would have been recited as a psalm of despair, and there would have been much cause for despair in Jewish experience. The psalm concludes with the sentiments with which Paul Simon opens The Sound of Silence, “the darkness is my closest friend.”

Existentialists would have welcomed Paul Simon’s lyrical expression of the reality that confronts us. The darkness, the fear of isolation, the fear of loneliness, the fear of loss, the fear of death itself, are regarded as fears that inhibit our true freedom as human beings, freedom can only come when the darkness is confronted. The existentialist view of the feeling experienced by Paul Simon in the early hours of that February morning would be that they were a spur to authenticity. Only when we have confronted the prospect of being alone in the darkness, only when we have accepted our nothingness can we be free to live authentic lives.

And the people bowed and prayed
To the neon god they made
And the sign flashed out its warning
In the words that it was forming
And the sign said, “The words of the prophets
Are written on the subway walls
And tenement halls”
And whispered in the sounds of silence

Reality is written in the mundane places; reality is spoken softly when there are no noises with which to mask it.

The concert finished with silence, with Paul Simon acknowledging the applause before the stage was darkened and there was no more sound. Face the darkness and there are no fears, silence itself becomes reassurance. 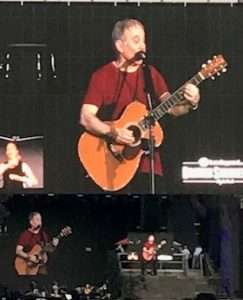