The nephews finished at primary school today. It’s the big school now for them in September. On the corresponding day in 1972, I walked from their school, High Ham Church of England Voluntary Controlled Primary School for the last time.

There was no school bell, just the quiet words of the teacher telling the class they could go.

The occasion went unmarked by any ceremony or observance; it went, for the most part, without comment. Seven of the class of twenty or so would not return in September: a fact that was as unremarkable as the passing of the seasons. There were no tears; no dramatic goodbyes; no words of reflection on how we would never again walk through the gate of the two teacher school.

The enduring memory is of Mr Britten, our headteacher standing in the school cloakroom and noting someone had left their coat behind. “It will be here when they come back in September,” he had commented. Six weeks seemed like an eternity to be waiting for a coat.

Two of us were being dispatched to one school while the other five went to another; a situation decreed by that strange and arbitrary institution called the 11+. It made little difference to people living in the same isolated, close knit community. We would be bussed in opposite directions in the morning and bussed back to the tiny village in the afternoon. Your friends were those who lived in your community; there was no public transport and, even when people were sufficiently affluent to have telephones, calls were too expensive to be made to chat to friends.

There were moments in the past when there was a temptation to set foot back inside the place, though the building now is a new one, much different from our Victorian building. There were times when it would have been tempting to step in and say, “I left here in 1972.”

To do so would be to look a complete ass. It would invite the response, ‘Yes and what do you want?’

People left the school every year. Every summer another little group headed out into the world, bussed off to other places, until they closed the grammar school and bussed everyone in the same direction. Having left in one year would be no more significant than having left in any other.

Looking at the great commotion now surrounding the end of school years, including ceremonies and church services, perhaps the flat calmness of July 1972 was not such a bad idea. It was a much better preparation for the realities of life. 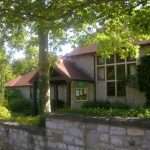