What did Albert Einstein think about when he went for a walk? Was it all theoretical physics? Did he never think about what he might have for dinner? Or what he needed to get at the shops? Or what was the name of the person he had spoken to the day before? It is said that when he and Nils Bohr met, they would immediately resume their conversation on physics at the point where it had ended at their previous parting. He is said to have once advised a friend that he never memorized anything he could look up. Einstein saw the mind as something to be used for thinking rather than storing facts.

Needing to write things down in order to think in a logical sequence, thoughts tend to wander when out for a walk, leaping from one topic to another without there being any logical sequence or coherent conclusion. Perhaps Einstein was wrong and it is writing things down that is causing the problem.

Even in classical times twenty five centuries ago, in the days of Plato, there were concerns that the human faculty for remembering was in decline. Socrates tells a story of a conversation between Thamus and Theuth in ancient Egypt. Theuth has come to Thamus with inventions that include the invention of writing and Thamus is concerned that writing will damage the memories of those who use it.

“For this invention will produce forgetfulness in the minds of those who learn to use it, because they will not practice their memory. Their trust in writing, produced by external characters which are no part of themselves, will discourage the use of their own memory within them. You have invented an elixir not of memory, but of reminding; and you offer your pupils the appearance of wisdom, not true wisdom, for they will read many things without instruction and will therefore seem to know many things, when they are for the most part ignorant and hard to get along with, since they are not wise, but only appear wise.”

It is extraordinary that two and a half thousand years ago Socrates regarded the most obvious of our aides memoire, one that we have for centuries assumed to be a matter of common sense, as something that would damage the human capacity for wisdom. What would he have made of Einstein’s suggestion?

Of course, inconsistent thoughts when out for a walk, rambling ideas that lead to no conclusion, have nothing to do with writing and much to do with a brain lacking in sharpness. 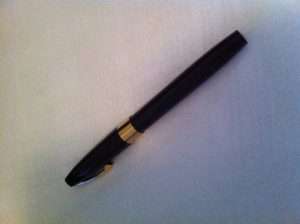