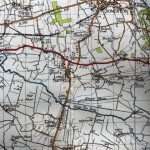 The fascination goes back to childhood days, perhaps it began with tales of pirates and maps of buried treasure, perhaps it was about the stories of armies advancing or navies sailing. Probably it was about my father’s work as a member of the ground crew for naval jets. Declassified maps would have been commonplace at home; creased and folded and marked and worn, they had been discarded as of no further use. The maps presented a picture of the county from a different perspective.

Maps have become as fascinating as a novel, though they are perhaps more like a history or a biography. Maybe, a memoir would be the most accurate description of their capacity, the thoughts they evoke are part autobiographical, part impression, and part plain misremembering.

Sheet 177 of the 1930 Revision of the Ordnance Survey with later corrections, first published in 1946, covers south Somerset and west Dorset cost £2.99 in an Oxfam bookshop and has been the source for hours of thought.

Roman buildings are common on maps of the area. Growing up in sight of the site of a Roman villa that yielded up a fourteen foot square mosaic floor that is a centrepiece in the county museum, the Romans were taken for granted when I was young; the most fascinating thing about them was the stories people told about seeing ghosts of soldiers. Only decades later is there appreciation of the rich and deep heritage that lay all around.

A thousand years after the Romans came the medieval parish churches. An imaginary tour of the parishes of the locality is a journey through the rites of passage, baptisms, weddings, funerals. The buildings will outlast the Church of England, which is in its final generation in most local communities. Perhaps there will be new ceremonies to replace the bland Twentieth Century language of the Anglican Prayer Book, perhaps, like the French, there will be a devising of a secular liturgy with which to mark solemn moments.

Much more recent are the villages, houses and buildings dating from the Eighteenth Century onwards. An imaginary tour of the roads and lanes of the district brings recall of people who lived in particular cottages and farms; living in a 1920s council house, there was always a certain envy of those who lived in period properties.

The 1946 map represents much of the reality I remember, the world had not changed much between then and the mid-1960s when my memories begin. It is good to look up from the map and stare across the landscape to Pilsdon Pen on the far horizon, lying in West Dorset. At 900 feet above sea level, it is within sight of the sea, and the edge of the map, and in the countryside between here and there lies a whole world of continuity.. 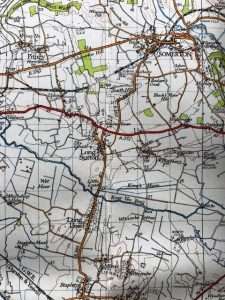