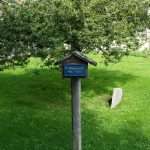 Easter 1913 was very early. Good Friday was 21st March, the day of the Vernal equinox. It was the day the poet Edward Thomas set out to cycle from London to find the arrival of spring. His destination was Exmoor, where he arrived on 28th March, to find that winter had been buried by spring flowers. In Pursuit of Spring, published in 1914, is his account of the seven day journey. Thomas writes of his visit to Glastonbury,

Winding round the base of the Tor, I rode into Glastonbury, and down its broad, straight hill past St John the Baptist Church and the notoriously mediaeval “Pilgrim’s Inn,” and many pastry cooks. Another peat cart was going down the street. The church stopped me because of its tower and the grass and daisies and half-dozen comfortable box tombs of its churchyard, irregularly placed and not quite upright. One of the tombs advertised in plain lettering the fact that John Down, the occupant, who died in 1829 at the age of eighty-three, had, “for more than sixty years owned the abbey.” He owned the abbey, nothing more; at least his friends and relatives were content to introduce him to posterity as the man who “for more than sixty years owned the abbey.” If the dead were permitted to own anything here below, doubtless he would own it still. Outside the railings two boys were doing the cleverest thing I saw on this journey. They were keeping a whip-top, and that a carrot-shaped one, spinning by kicking it in turns. Which was an accomplishment more worthy of being commemorated on a tombstone than the fact that you owned Glastonbury Abbey.

Edward Thomas was to die at Easter, three years later. On Easter Monday, 9th April 1917, under heavy snow, he was killed at the Battle of Arras.

Had Edward Thomas lived and had he written retrospectively of the Great War, who and what would he have considered worthy of commemoration? The acerbic perspective provoked by the thought that ownership of property was sufficient to merit remembrance might have prompted similar reflections on those who took decisions regarding life and death for thousands of soldiers.

Among the senior officers were many whose background and wealth and connections had meant that they had occupied senior ranks at the outbreak of the war. Did simply holding a high rank make one more worthy of commemoration than the private soldier? Read accounts of casualties and they will be listed as officers and men. Read battalion diaries and the names of officers who have been killed or wounded will be recorded; generally, it is not so with other ranks.

Edward Thomas considered the ability to keep a top spinning by kicking it as more noteworthy than owning property; what a different society might have emerged if effort and achievement had been valued more highly than wealth and social status. 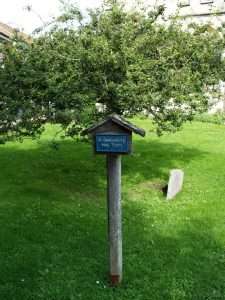